Archive for the ‘chicago’ Category 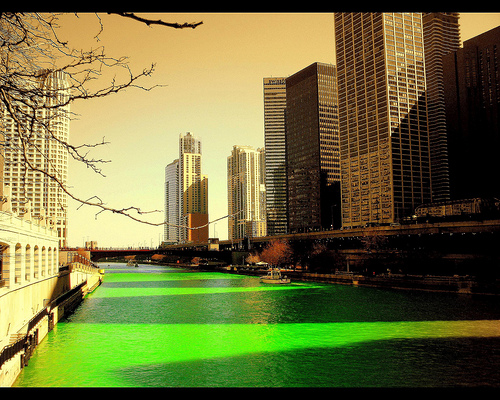 Posted in chicago, fun | Comments Off on Everyone is Irish….

Chicago Mayor Richard M. Daley, the most powerful big city Mayor in the nation, and heir to the legacy of his legendary father, Mayor and Cook County Democratic Party Boss Richard J. Daley, stunned reporters with his abrupt announcement that he would not seek a 7th term as Mayor.

For Chicagoans and watchers of Illinois politics, this is the equivalent of the Pope deciding to retire. The Mayor’s wife, Maggie Daley, has been seriously ill with cancer since 2002 and there is speculation that this was a factor in Daley’s decision. While his father was the iconic Machine Boss, he never acheived, even in his heyday, the iron grip over the City Council wielded by Richard M. Daley.

Is Chicago finally ready for reform?

Will be going to this Sunday night with Lex and Charles Cameron, Madhu and some of the cast of Chicago Boyz. Also present will be some of the gents from the popular milblog, BLACKFIVE and veterans groups in the Chicago area.

by Sebastian Junger was the book that was written in conjunction with this documentary; Junger will be on hand to answer audience questions. I am sure there will be a number of blog reviews of this screening come Monday and I will attempt to link to them all here when I write my own.

Deserving accolades for organizing this screening, a sizable undertaking, are Kanani Fong and Laura Kim. They have reached out to many people in this endeavor and extended every courtesy to veterans support groups and bloggers in particular.

RESTREPO opens to the public on July 2nd.

I am reposting Lex’s post in full. Basically, Illinois needs a thorough housecleaning of both parties – it’s a cataclysmic mess here.

Adam Andrzejewski is the only person running for the Republican nomination for Governor of Illinois who presents any hope of turning around the dire decline we are facing.

I had the pleasure of meeting Adam recently, and he confirmed the positive impression I got from his website. He is very smart, aware of the gravity of the problems facing Illinois, and has some concrete plans to change the way business is done here.

I was most impressed with his proposals to take on the culture of corruption that has made the once-great State of Illinois a national and even global joke.

Take a look at the issues pages on Adam’s site. Then compare the specifics he offers with, for example, the nonexistent proposals on Jim Ryan’s site, or the comparatively vague proposals of the long-time insider, and purported front-runner, Andy McKenna.

The insiders in both parties are so tightly wound in Illinois that they are referred to as “The Combine.” The GOP serves as nothing more than the junior partners in a combined Machine, and appears to have no principled differences whatsoever from the Democrats.

Adam’s candidacy presents a chance to move toward a genuine two-party political process in Illinois, and to start getting the financial mess under control.

Let me also address the cynical response that he “can’t win.” There is a large field, turnout will probably not be huge, and it won’t take much for one of the GOP candidates to pull ahead. So, vote for the best guy.

Plus, as Lech Walesa – an Adam supporter – put it: “Nobody gave us a chance to win over the communists. Nobody. And we proved them wrong.” The Combine can also be beaten.

Please take a look at Adam’s site if you are an Illinois voter.

Spent a pleasant afternoon at Cantigny, the estate of legendary Chicago Tribune publisher, broadcast pioneer and ardent isolationist,  Colonel Robert McCormick. After his death in 1955, McCormick had willed that the 500 acre grounds located in Wheaton, Illinois,  be turned into a memorial to the 1st Infantry Division of the US Army, in which he had served ( McCormick was a veteran of the Mexican Expedition and the Great War). Operated by the McCormick Foundation, a charitable and educational trust with an endowment that rivals that of Yale or Harvard universities, Cantigny now is home to an opulent garden, golf course, mansion museum, several restaurants, a greenhouse, a tank and artillery park, a children’s playground, visitor’s center and the Museum of the First Division. The grounds contain an array of armor on display for the tank aficianado, including the Sheridan, Sherman and variations of the Patton series up to the M-1 Abrams, including several “experimental” models plus a selection or artillery pieces going back well before WWI. Just added was a fully restored D-Day landing craft (still being unloaded from the trailer).  Aside from children’s tours and families present, I saw not a few veterans today, some very elderly and in wheelchairs, reminiscing together quietly by particular tanks or displays.

The museum has a collection of artifacts that run the gamut from the Revolutionary War to the Iraq War but the major sections are concerned with the two World Wars and the Vietnam War. Museum staff are friendly and helpful but unobtrusive and the basement contains a military library and archive that is open to the public for research.

The grounds are very extensive and the landscaped garden, which covers many acres,  is a world class feature in itself. The fee for admission is a mere $ 5 to park – the amenities and facilities (except the golf course and restaurants) are all free of charge.