THE COGNITIVE STIMULUS OF AMBIGUITY

The Eide Neurolearning Blog, one of my favorite stops in the blogosphere, had an important post for those concerned with creativity, learning and cognition. “Beyond Black & White: Learning to Tolerate Ambiguity “. An excerpt:

“The picture below shows an interesting view into the biology of perceiving ambiguity – when decisions about categories are not so clear. And, it shows that frontal striatal circuits play an important role in recognizing ambiguity. 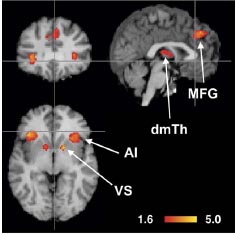 … In fact, ambiguity is not well-recognized as an important part of nearly all creative processes (some examples below). In brainstorming sessions, innovative work teams may practice with ambiguity exercises like those posted in the bottom link. There’s a book called The First Honest Book About Lies* that we like…at the bottom of the cover it says *You always have to read the asterisk. It has its humorous side, but about ambiguity – it hits the mark. The book starts out with optical illusions (these are ambiguous, aren’t they?), then moves on the topics like white lies and propaganda. In a gentle way, it introduces the idea that real life lived is filled with ambiguity and nuance – and you may find it a valuable starting point for discussion.”

Zen, particularly the practice of meditating upon the meaning of koans, riddles that are constructed paradoxically or seemingly irrationally (” what is the sound of one hand clapping?”) that are meant to be understood not by reasoning, but by insight, relies heavily upon ambiguity as a trigger. Some aspects of Sufi stories or parables also demonstrate this cognitive quality.

My speculation here is that the use of ambiguity prevents the brain from engaging in a kind of autopilot filing process and instead has to try and ” search” among a variety of possible contextual meanings, leading to new connections.

For Thursday’s segment of the series, Paul Kretkowski’s Beacon features a post by Dr. Nancy Snow. Professor Snow is a senior fellow at the USC Center on Public Diplomacy. An excerpt:

As for soft power, I am eternally biased in favor of the Fulbright program. I knew Senator Fulbright personally and I’ve yet to come across an octogenarian who could elicit Rock Star status with international Fulbright scholars as I saw on many occasions during my graduate school days living in Washington, D.C. Fulbright was very realistic about his namesake’s appeal: it must not come across as propaganda or appear too linked to government public diplomacy goals. It must stand on its own attractiveness (beauty for beauty’s sake) as an important tool in building mutual understanding. That’s soft power at its best, for I do believe that the United States still holds great pulling power as a seat of outstanding education and openness in the pursuit of ideas. (Or at least I would hope so!)

The beauty of Fulbright is that it is a truly international program that works with nongovernmental organizations and governments throughout the world in the furtherance of such openness. Its very mutuality in structure is what makes it a soft power all-star for a multitude of countries but with an American heritage.”

I have to add that a recently retired colleague of mine was a Fullbright scholar and I observed that her overseas experience was less a snapshot in time than the establishment of ongoing relationships. Not certain if that was typical of the Fullbright program but I strongly suspect it is.

CASTING A GLITTERING EYE ON SOCIAL TECHNOLOGIES AND 4GW

Dave Schuler, who I have discovered has a polymathic grasp of most subjects, had an important post at The Glittering Eye that I would like to direct to the attention of those readers inclined to strategy and military affairs. I have reproduced Dave’s post in it’s entirety:

The adaptive functionality of limitations on war

“At Gene Expressions, matoko-chan has posted a consideration of just war theory from an evolutionary standpoint, reflections on a give-and-take we’d had in the comments of one of my posts on just wars.

It’s important that we not lose track of the fact that human social systems and the laws and rules of ethics that come with them are technologies, tools for living happier and more satisfying lives. The ethical and legal principles governing the decision to go to war and how war should be conducted most definitely has benefits. They enable members of societies that practice them to specialize and, as has been known for nearly 300 years, that has economic benefits—we’re more prosperous as a result and live healthier, more fulfilling lives as a result. Practicing such principles allows the societies to avoid certain costs.

I am concerned that what we’re seeing in the hostilities between Israel and Hezbollah, both on the part of the Israelis and on the part of Hezbollah, will become the future way of war in a post-Westphalian world. This is the world being created by the radicals and ideologues who have degraded the role of states in human society by attempting to reduce the role of states and treating non-states as though they were states. That is the nature of radicals and ideologues: they hurry to discard social technologies without understanding the purpose and workings of the technology they’re discarding. I think it’s a world that will be poorer and meaner.

If you want to understand the social, economic, and psychological costs of this new world, look to Israel. They’ve been adapting to them for the last 50 years.”

I’m reserving comment for the moment hoping that those of you who have been deeply engaged in thinking about emerging military theories ( or, alternatively, attacking them) will offer your views on Dave’s post either here or at The Glittering Eye.

MULTINATIONALS 2.0: THE EVOLUTION TOWARD A NETWORKED AGE

Steve DeAngelis of ERMB and EnterraSolutions is at the cultural tipping point where his message, once reserved for consultations in elite corporate settings, IC and DoD related forums, think tanks and discussions on esoteric blogs like this one, is entering the MSM. I’ll have some comments later but first here is the context of Steve’s argument:

U.S. News & World Report quoted DeAngelis in “Multinationals 2.0“, an article that examined the position put forth by IBM CEO Samuel Palmisano that multinationals as a business structure have outlived their time and are due to be replaced by a radically decentralized, networked, corporate entity called ” globally integrated enterprises”. Steve explained why to U.S. News:

“Here’s the even bigger vision: As more and more countries–particularly the developing ones in Africa, Latin America, and the Middle East–become more interconnected and dependent, it will result in a safer, more orderly world. “The business world has this enlightened self-interest in integration,” says Steve DeAngelis, CEO of Enterra Solutions, a software solutions company that helps global companies integrate far-flung operations. “Look at China and the United States. Look at all the economic bridges we are building. Each one we build is a step away from military conflict.” So while multinationals have traditionally been stereotyped as corporate villains–for polluting the environment or attempting to overthrow unfriendly Third World governments–the new organization would supposedly make the planet a better place.”

Steve added some important observations in a post at ERMB

“The article notes that the old business model for multinationals was the “hub and spoke” model, where corporate headquarters was the hub and subsidiaries were the spokes. Business moved in direct relationship with the hub (which is a problem in a 24/7 world). Mohanbir Sawhney, a technology professor at Northwestern University’s Kellogg School of Management, agrees that this approach is no longer viable. In order to be resilient in today’s business climate, a business must “end up with centers of excellence distributed around the world.” In other words, instead of one hub with multiple spokes, you have multiple hubs (or nodes) of excellence which are connected and supportive. “

Structurally this would mean shifting away from the extreme hierarchical centralization of 20th century corporations. A centralized, bureaucratic model that resulted from adoption of Taylorism in production process, seeking economies of scale and the consolidation of industries into oligopolistic markets, a situation later ratified by New Deal regulatory supervision. The
“globally integrated enterprise” is structured somewhat closer to a scale free network, though it actually isn’t one, it would still be a radical departure from past practices for most companies.

Technically, we are talking about a corporation that would be a modular hybrid that employs a devolution of decision-making power and organizational decentralization to increase the corporation’s resiliency. There would still be some hierarchy and strategic direction but a GIE is a much flatter model than the pyramid-like IBM of 1965, 1985 or even 1995. In a globalized market a GIE is much harder for individual states to damage through inept regulatory, fiscal or trade policies than a multinational HQ that can be “held hostage” to erupting political controversies in a particular state or trading bloc.

On the flip side, the increasing ubiquity of real-time global communication has made corporate reputation a vital but fragile commodity. The room for error, scandal or ethical shortcomings is virtually nonexistent once a story has arrived on the global media radar. As with militaries or heads of government, corporations have only a few hours, perhaps minutes to react to an emerging story in a way the global audience will consider credible, sufficient and responsible. It is here that a resilient structure is required, specifically, as Steve wrote:

“…the essence of a Resilient Enterprise — freer linkages, richer exchanges, greater feedback loops, and improved environment for sharing and innovating.”

This kind of a structure is an advantage in two ways to a corporation facing a crisis. First, the freer flow of information from the outside, closer to real-time, simultaneously throughout the organization reduces the distortion of stovepiping and groupthink and prevents many problems from arising in the first place. Secondly, there is an acceleration of organizational response time, particularly where pro-active, autonomous, decision-making is part of the institutional culture.

It is important to point out that ” Multinationals 2.0″ represents a model far more than a reality but it is a model that the economic conditions of globalization would tend to reward. Multinationals 2.0 would also be a structure and a culture that would be easier to build from the ground up than try to retro-engineer into a venerable corporate giant like IBM with a longstanding institutional habits of mind ( Palmisano gets all the more credit for moving in this direction instead of taking the easier, short-term path of most CEO’s) .It will be interesting to see how foreign multinational models like the Japanese Kereitsus, Korean Chaebols or European conglomerates with strong state and union corporate governance, choose to engage this concept or if they will try an alternative strategy to build resiliency.

INSIGHT INTO THE ENTREPRENURIAL MIND

As the resident tech wizard Critt has defined ” public transcript”today and Dave has published that kind of a limited sketch on his blog Thoughts Illustrated, I can now point to the recent permutations of a side project that I have been involved in for the last couple of months. What began as an idea Critt had for an online ” game” experience has certainly journeyed some distance.

Watching the creative business process unfold has been an education for me, particularly as it involved the IT field in which Critt and Dave are so well versed. Dave’s depth of experience and range of contacts are amazing; I recommend those readers, particularly those who, for academic or professional reasons, drill down deeply into intelligence, military and diplo affairs to the exclusion of other subjects, take a close look at Thoughts Illustrated. Dave regularly highlights emerging tech, trends and links worth knowing about, particularly in regard to networks.