A few comments from me as well:

William Lind at DNI – “Beginning to Learn“. Whenever I read Lind’s On War column, I pretty much have only three possible reactions: He’s dead right; He’s dead wrong; He’s had too much German lager today. Lind was dead right in this one.

Purpleslog – who adds a valuable twist on to considerations of resilience and 4GW conflict with
” 5GW Thought: Would a Goal of a 5GW Organization Be To Reduce the Resiliency of the Target State?“. It’s cool to find someone else seeing something I clearly missed.

Dan of tdaxp – continues a long dormant but much praised series of applying 4GW theory to the history of Christianity’s rise, with “Jesusism-Paulism, Part IV: The Fall of Rome“. It might be helpful to read Part I, Part II. and Part III. first however.

ON RICHARD NIXON , PART I.

When we write or discuss the 19th century in terms of broad American history, it usually comes down to a handful of names. Abraham Lincoln, of course, enjoys pride of place but in his vanguard march Henry Clay, Daniel Webster, Andrew Jackson and John Calhoun. They march there not because everything they did was great or good but because, unlike lesser figures, even formidible ones like Mark Hanna or Thomas Hart Benton, these men and their battles defined the age. For the twentieth century, among the very few figures that historians will select to stand alongside Franklin Roosevelt will be Richard Milhous Nixon.

Nixon ran for national office no less than five times, winning four out of those five times and losing to John F. Kennedy only by one of the slenderest of margins in American history and winning reelection as President, in the midst of an unpopular war, by one of the largest landslides. Nixon served in both houses of the legislative branch where he established himself as a force to be reckoned with despite his lack of seniority. His exposure of Alger Hiss as a Communist spy earned Nixon the undying hatred of the left-liberal wing of the Establishment in a way that Nixon’s bareknuckle red-baiting against Jerry Voorhees and Helen Gahagan Douglas did not. Nixon’s comeback in 1968, after his crushing defeat (and subsequent televised self-destruction) in California’s gubernatorial election, was a skillfully executed rise from the political dead.

Space in a mere blog post does not permit detailing the heights of Nixon’s accomplishments in foreign policy or his ignominious fall in his criminal conspiracy of Watergate. For that, books are required:

If you are and remain a devoted Nixon-hater, your best bet in terms of scholarship would be historian Stanley I. Kutler’s Wars of Watergate and Abuse of Power. If you are an admirer of Richard Nixon, he wrote a slew of books of which his memoirs, RN, may be the most interesting from any American president other than those of Ulysses S. Grant. I would also recommend Six Crises. For a more balanced (though hardly favorable) view than Kutler’s, of this analytically brilliant, at times visionary and deeply flawed man, I like Richard Reeves’ biography, Richard Nixon:Alone in the White House. Nixon’s role in the Hiss case is illuminated by Sam Tanenhaus in his biography Whittaker Chambers.

Alongside Nixon and his critics are a few books by Nixon’s collaborators and aides. The postumously published The Haldeman Diaries are an indispensible resource for historians that far eclipses Haldeman’s The Ends of Power. Less meticulous, but a still interesting sampling of Nixon administration mentality, was From: The President, edited by Bruce Oudes. Henry Kissinger’s ponderously large, three volume memoirs have numerous valuable commentaries about Richard Nixon and especially, his foreign policy, must be included in any serious study of Nixon.

Most of the books produced by the Watergate conspirators tend to be at least as self-serving as Nixon’s account without the benefit of Nixon’s selectively incisive intellect. Dean’s Blind Ambition is probably among the worst of the lot but none of them, often written hastily in the face of mounting legal bills and fines, add much substance to that covered by Bob Woodward and Carl Bernstein. John Ehrlichman’s cynicism is occasionally amusing as is G. Gordon Liddy, though often unintentionally. Of lesser figures, little need be said.

Next, Part II. Nixon in his own words:

ON A (MUCH) LIGHTER NOTE…

I’m working on another decent sized post that I’m simply not going to finish this evening. Too much research involved. But as I was taking periodic breaks by surfing my blogroll, I came across the following at Purpleslog that gave me a good laugh.

“Elmo and the Decline of the American Nation“ 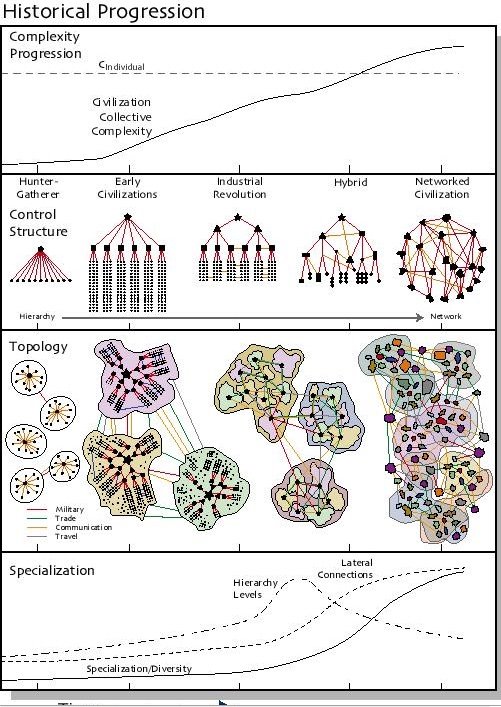 I’ve been pondering the relationship between complexity and connectivity ever since I was prompted by a post and an email from Dave at Thoughts Illustrated. Due to time constraints, I was not able to give the insights Dave offered in his email the proper attention they deserved then but I’m returning to the subject today.

The background here is a short paper on civilizational complexity, ” Complexity Rising:From Human Beings to Human Civilization, A Complexity Profile” by Dr. Yaneer Bar-Yam that I forwarded to a number of thoughtful people, some of whom also were bloggers. My take on Bar-Yam’s paper at the time had to do with ” The Resilience of Civilizations“; Steve DeAngelis at ERMB responded with “Networked Civilization Revisited“; Curtis Gale Weeks at Phatic Communion put these ideas in the context of the theories of John Boyd with “Rule Sets and the Revised OODA” and Dan of tdaxp followed Curtis with “Comments on Verticalization and Progress“. Dr. Von, who introduced me to the ideas of Dr. Bar-Yam in the first place, offered some verbal commentary in person but helpfully pointed to an older post of his, “Our Universe:Continual Emergence“as well.

The Relationship of Complexity and Connectivity in Civilization:

Civilizations are long enduring, complex adaptive social systems that remain distinctive from their neighbors. Differences between civilizatons are visible even to casual observers in the form of culture, language, religious belief, social customs and economic productivity. The origin or causation of civilizational differences have been hotly debated for dozens of centuries and at various times, climate, geography, divine favor, chance or superiority in terms of culture, genetics, martial prowess, political, economic or moral systems have all been offered up as explanations and all have met with fierce criticism.

However, my purpose here is not to weigh in on the merits of Baron de Montesquieu, Jared Diamond, Karl Marx, Victor Davis Hanson or Robert Wright but to point out, first, that the superficial manifestations of civilizations, that make them unlike others, all represent underlying patterns of complexity and of connectivity. Secondly, that while complexity and connectivity in a “superorganism” sized social system have a high degree of interaction and are often mutually reinforcing, they are not one and the same. On some levels, complexity can increase or sharply limit connectivity. Connectivity in turn, may simplify or complicate the workings of a system, increasing or decreasing ” friction” as well as numerous other effects.

Take for example, late medieval to early modern central Europe. The Holy Roman Empire, at one point, had something on the order of 300 independent, overlapping, interdependent polities. That’s more sovereigns than exist today on the entire planet, some ruling nothing bigger than a knightly estate, crammed into an area slightly larger than Germany.

Obviously, in the case of the Holy Roman Empire, the degree of political and social complexity were very high relative to the population of the time or to monarchical states like England . This complexity came at the expense of connectivity, particularly economic connectivity given the number of sovereign and semi-sovereign entities ( most with their hand out) that could and did interfere with trade in a myriad of irrational ways. Unsurprisingly, even after Napoleon consolidated this Germanic crazyquilt into a more manageable 35 state Confederation of the Rhine, the first serious exploration of German unification involved a proposal for a customs union, the Zollervein, that would have simplified, and rationalized trade, increasing the level of connectivity.

Dr. Barnett has made a similar argument regarding the connectivity effect of the Federal union of the United States in Blueprint for Action as well as elsewhere. If you look at the lowest panel of the Bar-Yam Historical Complexity diagram above, you will note the “hierarchy” line levelling off and falling while the “specialization/diversity” and “lateral connection” lines rising in parallel along a timeline. This is a nice visualization of changing the political or legal complexity of rule-sets ( reducing the number of competing rule-sets) intersecting with improvements in technology to permit higher levels of emergent connectivity.

Granted, the higher levels (and faster velocity of transaction) of connectivity are also, in themselves a form of complexity that will generate unanticipated spillover effects that will give rise to demands for regulation or control in the form of new rule-sets. As will the resistance of vested interests to emerging forms of connectivity or technology that endanger rentier arrangements, oligopolistic markets or the authority of corrupt tyrannies. As the relationship between complexity and connectivity is dynamic, these reactionary political responses to creative destruction are unavoidable.

Their success though, is far from inevitable. We have choices if we care to exercise them.

Eddie from Live from the FDNF gets top billing for ” Tom Odom’s “Journey Into Darkness“, a review of Journey into Darkness: Genocide in Rwanda by Small Wars Council member Dr. Thomas Odom.

Shannon Love at Chicago Boyz – “The Collapse of Liberal Orders“

Edge Perspectives with John Hagel – “Langlois and the Vanishing Hand“

Paul B. Hartzog – “ The Age of Distraction“