While doing some research on foreign policy and military strategies of the Bush administration I happened to pull up some NCW articles by Dr. Barnett’s mentor, Vice-Admiral Arthur K. Cebrowski which I found to be very stimulating reading. In particular, one powerpoint graph by Cebrowski had a segment he labelled ” Shared Awareness“that was adjacent to Network-Centric Operations to indicate the real-time, mutual, cognizance of the same information and concepts throughout the chain of command in a battle. I found the Shared Awareness concept an attractive one and upon reflection decided that Admiral Cebrowski had articulated a phenomena with far wider application than in the military scenario alone.

In public affairs we hear journalists and intellectuals refer to ” the marketplace of ideas ” and “the war of ideas “, usually to illustrate the conceptual competition between Right and Left for the public acceptance of their policy proposals and general political ideology. Marketplace is a kinder and gentler term or end of a continuum for a contest that in international relations or undemocratic societies often accompanies or incites ramped up levels of organized violence or implies that possibility. Despite claims of detente there was nothing peaceful about the coexistence of the Soviet Union and the West. Likewise, the caustic rhetorical contempt hurled on liberal democracy and on the Jews by the Nazis was a necessary prelude to trying to liquidate both. The Cold War and WWII both represented true “wars of ideas” as well as physical battles.

Memes and memetic theory are a popular explanation for the process by which ideas spread through a population by a sort of ideological Darwinist competition. Certainly some ideas seem to be more “contagious” than others, particularly those concepts that are produced via Horizontal thinking and cross the borders of domains. Some ideas, particularly political and religious concepts can inspire so much intensity of devotion that millions have willingly gone to their deaths to champion them or committed ghastly atrocities on ” non-believers”.

I’m borrowing here from both Richard Dawkins and Admiral Cebrowski when I suggest that wars of ideas are fought in the realm of Shared Awareness with the mediasphere of modern telecommunications being the primary transmission belt, allowing the rapid networking of adherents that was impossible fifty, thirty or even ten years ago. The speed of transacting attractive memes through self-organizing networks is what may drive public debate in the future, possibly today – a ” dominance of the intellectual battlespace”: 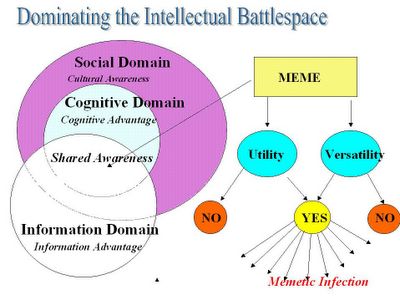 To dominate the intellectual battlespace, a network injects its memes into the Shared Awareness of the mediasphere either spread its worldview, achieve concrete objectives or discredit and frustrate rival networks. Memes do not need to be true to become contagious or be more ” right” than the memes of rival networks – just have a greater psychological attraction. What makes memes attractive ? I’d postulate that two factors weigh heavily – utility and versatility.

I use the term “utility” to refer to the capacity of the meme to fill a psychological need by lowering anxiety by either increasing an individual’s comprehension of the world ( positive) or by reinforcing denial ( negative) and screening out perceptions and innoculating the individual from concepts they consider disturbing. The flourishing of concepts like anti-semitism, Nazism, racism. Stalinism, xenophobia, conspiracy theories, astrology and the like are evidence that truth or at least falsifiability are not directly related to a meme’s attractiveness.

I use the term “versatility” to refer to the horizontal quality of the meme – the extent to which it can be adapted across the boundaries of domains or cultures. Simple memes would seem to have a greater advantage over complex memes in terms of becoming attractive. String theory for example, has not spread as widely through our Shared Awareness as concepts from classical physics because String Theory is only well-understood by relatively few people and is difficult to analogize. Complex memes however, might have greater traction within a domain, among field experts or they might move to discredit the meme if it runs counter to orthodox ideas.

A meme that has high utility and high versatility would be a good candidate to ” infect” other networks and systems through the common space of Shared Awareness or to distract as an attention-diverting ” white noise” attack. A network that systematically and strategically plans the introduction of memes into our Shared Awareness is a network aiming to dominate the intellectual battlespace.

This entry was posted on Thursday, May 26th, 2005 at 10:09 pm and is filed under Uncategorized. You can follow any responses to this entry through the RSS 2.0 feed. Both comments and pings are currently closed.