Archive for the ‘e.o.wilson’ Category

E.O. Wilson on the Evolutionary Origin of Creativity and Art 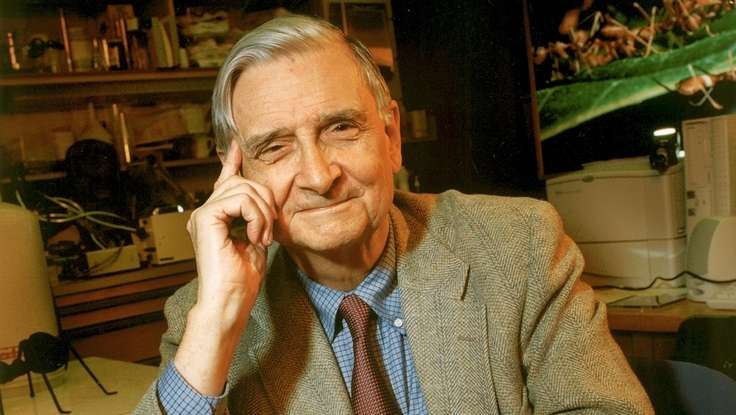 On the Origins of the Arts

….By using this power in addition to examine human history, we can gain insights into the origin and nature of aesthetic judgment. For example, neurobiological monitoring, in particular measurements of the damping of alpha waves during perceptions of abstract designs, have shown that the brain is most aroused by patterns in which there is about a 20 percent redundancy of elements or, put roughly, the amount of complexity found in a simple maze, or two turns of a logarithmic spiral, or an asymmetric cross. It may be coincidence (although I think not) that about the same degree of complexity is shared by a great deal of the art in friezes, grillwork, colophons, logographs, and flag designs. It crops up again in the glyphs of the ancient Middle East and Mesoamerica, as well in the pictographs and letters of modern Asian languages. The same level of complexity characterizes part of what is considered attractive in primitive art and modern abstract art and design. The source of the principle may be that this amount of complexity is the most that the brain can process in a single glance, in the same way that seven is the highest number of objects that can be counted at a single glance. When a picture is more complex, the eye grasps its content by the eye’s saccade or consciously reflective travel from one sector to the next. A quality of great art is its ability to guide attention from one of its parts to another in a manner that pleases, informs, and provokes

This is fascinating.  My first question would be how we could determine if the pattern of degree of complexity is the result of cognitive structural limits (a cap on our thinking) or if it represents a sufficient visual sensory catalyst in terms of numbers of elements to cause an excitory response (neurons firing, release of dopamine, acetylcholine etc. ) and a subsequent feedback loop. Great art, or just sometimes interesting designs exhibiting novelty can hold us with a mysterious, absorbing fascination

….If ever there was a reason for bringing the humanities and science closer together, it is the need to understand the true nature of the human sensory world, as contrasted with that seen by the rest of life. But there is another, even more important reason to move toward consilience among the great branches of learning. Substantial evidence now exists that human social behavior arose genetically by multilevel evolution. If this interpretation is correct, and a growing number of evolutionary biologists and anthropologists believe it is, we can expect a continuing conflict between components of behavior favored by individual selection and those favored by group selection. Selection at the individual level tends to create competitiveness and selfish behavior among group members—in status, mating, and the securing of resources. In opposition, selection between groups tends to create selfless behavior, expressed in
greater generosity and altruism, which in turn promote stronger cohesion and strength of the group as a whole

First, while I am in no way qualified to argue evolution with E.O. Wilson, I am dimly aware that some biological scientists might be apt to take issue with Wilson’s primacy of multilevel evolution. As a matter of common sense, it seems likely to me that biological systems might have a point where they experience emergent evolutionary effects – the system itself has to be able to adapt to the larger environmental context – how do we know what level of “multilevel” will be the significant driver of natural selection and under what conditions? Or does one level have a rough sort of “hegemony” over the evolutionary process with the rest as “tweaking” influences? Or is there more randomness here than process?

That part is way beyond my ken and readers are welcome to weigh in here.

The second part, given Wilson’s assumptions are more graspable. Creativity often is a matter of individual insights becoming elaborated and exploited, but also has strong collaborative and social aspects. That kind of cooperation may not even be purposeful or ends-driven by both parties, it may simply be behaviors that incidentally  help create an environment or social space where creative innovation becomes more likely to flourish – such as the advent of writing and the spread of literacy giving birth to a literary cultural explosion of ideas and invention – and battles over credit and more tangible rewards.

Need to ponder this some more.

The Eide Neurolearning Blog run by Drs. Brock and Fernette Eide, has long been one of my favorite blogs, probably the top non-.mil related, SME blog among my regular reads. Here’s an example of why:

High Conceptual Thinkers are often…- Omnivorous Learners: The world may be their oyster. Because of their quest for the “interesting”, they may love the Internet, read entire encyclopedias, or incessantly question adults about the real world, and so learn a little bit about everything. They may not hit ceiling scores on the conceptual knowledge IQ subtests because their omnivorous approach to figuring out the world around them.- New is the Thing: HCTs prefer novelty (this is how they develop new conceptual categories) and are tickled by unconventional viewpoints or discoveries. – Big Picture, Not Little Details: HCTs don’t always transition well to the “precision years” of late elementary, middle school, or beyond.

– Boredom is Death: Although using the ‘b’ word is notoriously a “no-no” word when talking to teachers, these kids rebel against what they see as boredom. Boredom may really seem like death to young HCTs. If young HCTs seem “driven by a motor”, it’s intellectual restlessness and it can be a blessing as well as a burden.

Not surprisingly, these kids often find classroom learning unsatisfying. After all, much of early education is focused on mastering basic skills or established facts, this is not what these kids are about. They’d rather be finding new worlds to conquer.

Although these kids are challenging to teach and parent, they are also a delight, and Dan Pink and others have suggested that the Conceptual Age is upon us and this pattern of thinking should be what we should be encouraging.

“High conceptual thinkers” – those with an insatiable intellectual curiosity, who see meta-level patterns and excel at constructing paradigms, extrapolation, synthesis and consilience are probably not a large percentage of the population and, most likely, they include eccentrics and cranks as well as highly accomplished individuals like E.O. Wilson, Buckminster Fuller, Freeman Dyson, Nikola Tesla, Richard Feynman and probably figures like Thomas Jefferson, Theodore Roosevelt, Sir Richard Francis Burton, Winston Churchill, Robert Hooke, Da Vinci and numerous others.

There seems to be some congruency between HCTs and the category of people known as polymaths, which raises the question of whether HCT are born or can be encouraged to develop such a cognitive profile from education and life experience. The Eides offered a list of techniques for teaching children recognized as HCTs, but to my mind, these would also benefit a fairly broad section of students:

– Sky’s the Limit: If an idea or a lesson would be interesting to a wonky tech-y post-college 20-something, then it’s fine for the HCT. If a story or thing could be written about in Wired, Fast Company, or Mental Floss, then you’re probably on the right track. Sky should be the limit. Even some generally excellent gifted programs we’ve seen may grossly underestimate an HCT’s ability to think about advanced concepts. Also because HCTs develop their ideas through pattern recognition, they may want to see many examples and permutations, and complex presentations in order to help organize their ideas into simpler concepts.

– Play with Ideas: Conceptual thinkers like and need to play with ideas. Play expands ideas, creating a new opening for associations. Play means not micromanaging learning experiences – allowing some dabbling, and taking away some of the “high stakes every time” routine (e.g. not everything should be graded).

– Argue with Ideas We think many educational curricula wait way to long before they allow young HCTs to consider different viewpoints, learn how to frame arguments or actually debate, but this is often what HCTs love. If they don’t get it at school, make sure they get it home…maybe at the dinner table? Half of the 400 eminent men and women profiled in the Goertzels’ Cradles of Eminence came from “opinionated” families: “It is these homes that produce most of the scientists, humanitarians, and reformers.”

Compare these recommendations with the advice offered by nanotechnologist Dr. Eric Drexler of Metamodern:

Studying to learn about everything

To intellectually ambitious students I recommend investing a lot of time in a mode of study that may feel wrong. An implicit lesson of classroom education is that successful study leads to good test scores, but this pattern of study is radically different. It cultivates understanding of a kind that won’t help pass tests – the classroom kind, that is.

Intellectual curiosity would seem to be the axis that would make these approaches work effectively, and possibly, that’s what these techniques stimulate.

PRESENT AT THE CREATION: E.O. WILSON IN SEED

The father of sociobiology and prophet of consilience, E.O. Wilson is featured in SEED.

“…. In the late 1950s, Wilson discovered pheromones as the basis of chemical communication in ants. He identified 624 ant species in one genus and named 337 of them (19 percent of all ant species in the Western hemisphere). He established evolutionary biology as an esteemed pursuit in the late 1950s and early 1960s, a time when the discovery of the double helix and the molecular revolution it unleashed were eclipsing more traditional scientific disciplines. His work with Robert MacArthur on island biogeography is a seminal text in ecology. He’s been recognized internationally for contributions to science and the humanities and has received numerous awards including the National Medal of Science and Japan’s International Prize for Biology. He’s won two Pulitzers. And if Rachel Carson is the mother of the modern-day environmental movement, Edward O. Wilson is quite arguably its father. Indeed, those who know him call this work his mission. “