Pundita – War at sea: piracy and the rise of private navies and More on William Ayers’ education plan: Ayers-Obama relationship primarily an education issue for voters — but try telling that to the news media

ERMB – Books Forever and When does Connectivity Narrow Thinking?

And, finally, Lexington Green sent me the following: 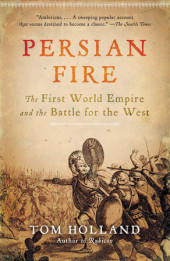 I’ve finished reading Persian Fire: The First World Empire and the Battle for the West

by Tom Holland. The Persian Wars are the ur-narrative in the recesses of the West’s cultural imagination and Holland does his usual superb job of translating ancient conflict into a modern context without losing the authenticity of the former. It’s a jarring but a probably accurate analogy for Xerxes to view the Spartans, who murdered his ambassadors in an unprecedented act of blasphemy, as a “terrorist state” on the far-flung fringes of civilization. This Persian viewpoint is interwoven by Holland with the traditional historiographic Greek view of Persia as the harbinger of Eastern tyranny and slavery. A fun read!

roughly one section per night. Epictetus translates well, unsurprising as the former slave turned philosopher was the ultimate up by his bootstraps thinker. Willl comment further when finished.

Started reading my review copy of Thomas Barnett’s Great Powers: America and the World After Bush

. I can see the significant changes in editing, revision and updating from the rough draft I read months ago. Great Powers is going to pack a punch and will spark debate because Tom is departing sharply from the unimaginative, Left-Right, Dove-Hawk formulaic debate over Iraq/GWOT and his argument will either be embraced ( because there are ideas in Great Powers a wide spctrum of the population will like) or be bitterly attacked ( because there are many ideas that will infuriate robotic partisans) or both. It won’t be ignored.

I also see that more changes may be coming and that my uncorrected proof edition isn’t the final iteration, either. Look for a full review here in late November or early December.

This clip has a classic statement from Senator Barry Goldwater at the 1960 Republican Convention, which I think may be food for thought for all the conservatives of a general libertarian-pragmatic  bent who may be unhappy with the drift of the Republican Party.

And check out this post at Security and Liberty.

Mandelbrot and Taleb on the Economic Crisis

They are talking not “Great Depression” but a system perturbation  on an epochal scale that causes an economic Black Hole.

My apologies for the slow posting here and on my related sites. I’m in sort of a Hell Week right now but it will eventually pass.

Therefore, it seems like a propitious moment to call your attention to Antilibrary, a new group blog created by one of my co-authors, A.E. of Rethinking Security. You’ll see many familiar names and some new ones on the vibrant contributor’s list there. I intend to send A.E. a cc’ of my book reviews once I clear my schedule ( I intend to do two big reviews before Christmas – Great Powers and The Culture of War).

Here’s a taste of the Antilibrary ( which, as a parenthetical aside, needs some kind of visual totemic representation of Nassim Nicholas Taleb, the originator of the “Antilibrary” concept, on the front page. I don’t know the man but I suspect his reaction would veer between irritation and being analogous to  Haile Selassie’s attitude toward the Rastafarians):

The history of ‘warriors for the working-day’

As a teenager I cut my teeth reading military history. John Keegan’s The Face of Battle (1976) came as a revelation. Keegan wrote of three great battles (Agincourt, Waterloo and the Somme) at the level of ordinary soldiers – Shakespeare’s ‘warriors for the working-day’ – rather than that of generals and staff officers, as had been the case.

More recently the pendulum has swung back, with historians writing very good books that balance the perspective of the ‘poor bloody infantry’ with the operational, strategic and political levels of war. Casting an eye across my book shelves (not my anti-library, I hasten to add), I spotted Adam Zamoyski’s 1812 and Antony Beevor’s Stalingrad, both of which exemplify this approach to military approach