Two notes suggestive of the significance of ritual

[ by Charles Cameron — Castro asks the Pope about it, suicide bombers don’t get any — ritual ]
.

I have been promising to write about ritual for some time now, and meanwhile other things have intervened…

Two recent news stories, however, remind us that ritual is not as insignificant or even passé as our non-depth-psychological, a-comparative-religious, un-cultural-anthropological secular mindset might lead us to believe…

Let’s start with Pope Benedict XVI. He’s known to be a bit of a stickler for decent ritual, having penned the major papal exhortation Sacramentum Caritatis, the “motu proprio” Apostolic Letter Summorum Pontificum, and, as Cardinal Ratzinger, the book The Spirit of the Liturgy.

Fidel Castro, on the other hand, is more interested in politics than piety, or so the story goes – and was excommunicated in 1962.

During his March 29 meeting with Pope Benedict XVI, Fidel Castro questioned the Pope about reforms in the Latin liturgy, and asked for books that would help him understand changes in the Church, the Vatican has disclosed.

That’s interesting, and a wee bit provocative of thought…

The other incident that caught my eye was a piece by Ashfaq Yusufzai on Central Asia Online headed Suicide bombers receive no death rituals, with the sub-header Scholars say bombers are the most unfortunate of people:

Suicide bombers who believe they will go to paradise are mistaken, ulema scholars say. “The suicide bombers are the most unfortunate people on the surface of the earth, as they are neither bathed nor buried, unlike undisgraced Muslims,” said Maulana Aminullah Shah in Par Hoti Mardan. Shah, a prayer leader in Mohallah New Islamabad, Par Hoti, Mardan, said he felt sorry for Rehmanullah, a 17-year-old suicide bomber who attacked Afghan and coalition forces last September and was buried without a funeral prayer.

And from the same article:

Ajmal Shah, a prayer leader in Daudzai, Peshawar, is blunt about the importance of those rituals. “The act of suicide bombing is condemnable. All those blowing themselves up and killing innocent Muslims wouldn’t find a place in paradise as they had been promised by their trainers,” he said of the promises the Taliban use to lure teenage boys into becoming suicide bombers.

Ritual. Oh, I know — “we moderns” like to think of it as outmoded, tedious, repetitious, dry as dust…

But it reaches those it reaches, it digs deep into them, it has them by the heart.

Of Robert Bales and Dennis Weichel 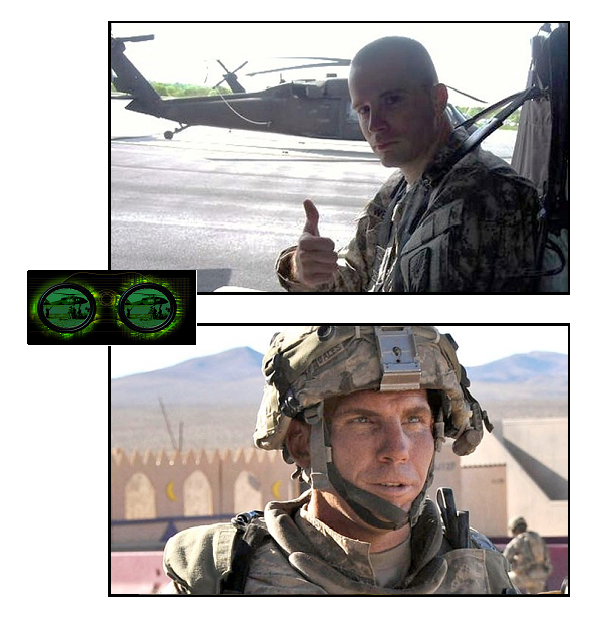 The question is: who gets top billing — Specialist Dennis Weichel (upper image above), who saved the life of a young Afghan boy, Zaiullah, throwing him out of the path of an oncoming MWRAP, at the cost of his own life — or Staff Sergeant Robert Bales (lower image), who is alleged to have killed a dozen or more Afghans, men, women and children, in a shooting spree (or two)?

El Snarkistani gives us one answer at It’s Always Sunny in Kabul:

I do know that Good Morning America has already spent quite a bit of airtime on the Bales’ case, from his financial past, to his injuries, to more unfounded speculation about his mental health. Over several days.

Here’s a pop-psych rough cut on why that might be:

Media studies show that bad news far outweighs good news by as much as seventeen negative news reports for every one good news report. Why? The answer may lie in the work of evolutionary psychologists and neuroscientists. Humans seek out news of dramatic, negative events. These experts say that our brains evolved in a hunter-gatherer environment where anything novel or dramatic had to be attended to immediately for survival. So while we no longer defend ourselves against saber-toothed tigers, our brains have not caught up.

And I cannot judge SPC Weichel, either. I can and do admire him, and am grateful to him — and my heart goes out to his family, his comrades, the young boy whose life he saved, and his family and friends.

In both men I see the human condition under pressure — its breaking points and possibilities.

You can read El Snarkistani’s piece, The Madness of SPC Weichel in full for more of the possibilities…

After many years of  interaction in the blogosphere, I had the pleasure of finally meeting Matt Armstrong of the noted public diplomacy and information influence blog MountainRunner, at a suburban Chicago watering hole.  A lively discussion ensued in which Smith-Mundt legislation only made the briefest appearance. 🙂

[ by Charles Cameron — truth or consequences? ]
.

Okay, you can’t always trust intelligence agencies: some of what they do is necessarily clandestine.
And you can’t always trust the media: some of what they do is allegedly fair and balanced.
Then there are folks like Michael Ruppert, who holds VP Dick Cheney at least partially responsible for 9/11…
And now Robert Spencer thinks Al-Qaida maybe runs CIA counterterrorism?

Unh?
So who can you trust?

Al-Awlaki and the former and latter rains

I’ve posted more than once about Sheikh Imran Nazar Hosein [eg: The United States of Islam and Iran or Afghanistan? The Black Flags of Khorasan]: today I saw a clip (screen-cap above) in which he eulogizes Anwar al-Awlaki.

So first, some background.

The imagery of “the first rain and the latter rain” dates back at least to the Torah.

And it shall come to pass, if ye shall hearken diligently unto my commandments which I command you this day, to love the Lord your God, and to serve him with all your heart and with all your soul, that I will give you the rain of your land in his due season, the first rain and the latter rain, that thou mayest gather in thy corn, and thy wine, and thine oil.

That seems to be a fairly straight forward agricultural usage, although as I mentioned recently, scriptural exegesis under the PaRDeS system involves four levels of interpretation.

Be glad then, ye children of Zion, and rejoice in the LORD your God: for he hath given you the former rain moderately, and he will cause to come down for you the rain, the former rain, and the latter rain in the first month.

But this comes in a celebrated chapter which begins with the sounding of an apocalyptic trumpet and the declaration that “the day of the LORD cometh, for it is nigh at hand” – and which also contains the prophecy (verses 28-30):

I will pour out my spirit upon all flesh; and your sons and your daughters shall prophesy, your old men shall dream dreams, your young men shall see visions: And also upon the servants and upon the handmaids in those days will I pour out my spirit. And I will shew wonders in the heavens and in the earth, blood, and fire, and pillars of smoke…

By the time we reach the New Testament, the theme is clearly used (James 5.7) with a Christian eschatological implication:

Be patient therefore, brethren, unto the coming of the Lord. Behold, the husbandman waiteth for the precious fruit of the earth, and hath long patience for it, until he receive the early and latter rain

And indeed, the imagery of the Latter Rain as an outpouring of the Spirit to occur in the end times has given rise to a movement or series of Pentecostal movements going under the name of the Latter Rain, which have at times drawn the disapproval of apologetics scholars and even fellow Pentecostals.

Bearing that in mind, it is interesting to note the following hadith of the Prophet:

“The example of my Ummah is like that of rain. It is not known whether the initial part (of the rain) is good or the latter part.”

..what it means is that among those who come later there will be those who are similar to those who came before, and they will be so close that the one who tries to compare them will not know which is better, even though one of them is in fact better.

This is glad tidings for those who come later, that among them will be those who are close to those who came before them, as it says in another hadeeth: “The best of my ummah are the first and the last, and between them there will be some crookedness. Would that I could see my brethren.” They said, “Are we not your brethren?” He said, “You are my companions.” This shows that precedence was given to the Sahaabah, because they alone are his companions, which is a higher status than merely being brothers.”

In his tribute to “our brother Sheikh Anwar al-Awlaki” Sheikh Imran Hosein says “I don’t think there’s need to say more than one statement about Anwar al-Awlaki.” He then quotes the same hadith, repeating the first phrase for emphasis:

Anwar Awlaki belongs to the last shower. That is his status, may Allah grant him Jannah.

— Jannah being the garden of Paradise.

But see for yourself — the video clip is only a minute long, and the hadith and commentary are provided below it on the YouTube site: