Going to the Dogs

Fallows on John Boyd and Boyd 2008

James Fallows of The Atlantic Monthly recently posted on Colonel John Boyd ( Hat tip to Fred Zimmerman) and I missed it in the pre-Holiday chaos:

First in a series of year end pensees: grand strategy

Could end up being a very brief series, but here is one to start:

As my wife and I near our third consecutive Christmas/New Year stretch outside the United States, mainly we feel lucky for all that we’ve been able to see and do and experience in China and its environs.

But of course there are costs. And while I wouldn’t exactly put this at the top of the list of things we regret missing out on (compared, say, with seeing our families and friends etc), I am in fact sorry not to have been around for the last few installments of the John Boyd Conferences, where people interested in Boyd’s theories of competition gather to apply them to topics ranging from financial meltdowns to handling Iraq. Much more about Boyd via links you can find here, here (second item), here,  here, and here, for starters. 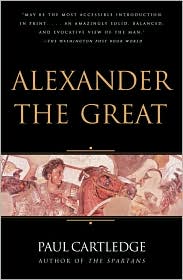 I just picked up the eminently readable biography,  Alexander the Great

by Cambridge professor and classical historian Paul Cartledge . I’ve previously enjoyed Cartledge on his explanations of Spartan culture and history and the first few chapters of Alexander are just as clear and enjoyable.

This was a very enjoyable exchange both for it’s civility as well as the erudition of the debaters ( Pundita opines at length here on the discussion) Dave Schuler and Dr. Bernard Finel. The former may not seem remarkable but by contrast, HNN, a site with an audience that is heavy in professional and aspiring historians and social scientists, cannot run an article related to either Israel or Islam (or George W. Bush) without provoking outbursts of (at times) maniacal vituperation and flaming in the comments section.

Fabius was kind enough to link to me and here is a key excerpt from his post:

State is the natural counter-weight to DoD.  In a parochial society such as ours the State Department staff should be those best able to understand the outside world in any fullness, in a multidimensional fashion. It has experts with a depth of foreign experience unmatched by other Government agencies – unlike the academics in the CIA or the military professionals in DoD.

Deep knowledge of foreign cultures and their leaders is necessary for success in a multi-polar world.  We’ll need people like Robert Clive and Sir Richard Burton, and State is where they’re most likely to find a home in our bureaucracy.  But not, of course, in today’s State Department. Nor anywhere in the US Government apparatus, which often rejects people with great initiative and expertise as surely as your body rejects foreign bacilli.

That’s the news; here is the bad news

My analysis from August and Zenpundit’s today, plus those he link to are all – in a sense – irrelevant.  They ignore the two key aspects of the problem.

First:  American history offers no precedent for institutional changes of this magnitude.  The recent re-organization of the Homeland Security agencies – a much smaller project – does not provide grounds for optimism.  There might be no precedents for reform of such large, entrenched organizations.  Growing an organization, as Charles Hughes did for State, is far easier.

Second:  there are good reasons that American Presidents do not attempt institutional reform on a large scale.

Stating the need for reform is the easy part.  It has been done well and repeatedly for the Defense Department over several generations – to no effect.  Describing how to effect reform is the challenge.

DNI – HONORÉ AS THE HEAD OF FEMA

By special request from Project Whitehorse. I agree, by definition and experience, General Honore is well qualified. Thus, it is with some irony that I present the next link.

Evidently, military talent being used in other fields is starting to rub some folks the wrong way. J. gives a balanced assessment but I think those complaining would better spend their energies addressing why civilian agencies and their leadership are frequently less than outstanding (Hint: excessive numbers of lawyers and multiple levels of lawyering issues is one reason).

I have a feeling that there are plausible sociobiological/evolutionary psychology reasons for this to be the case.

A cool COIN reading list and the reasons why. Enjoyed sifting through it to see what I have on my shelf already and what I might want to pick up down the road.

This is Tim Brown, CEO of Ideo speaking at TED.  A good talk where Brown discusses the relationship between play and unlocking creativity by allowing adult thinking patterns to revert to the freer, less judgmental, more open to possibilities perspective of childhood.

Posted in cognition, creativity, TED | Comments Off on Tim Brown on Creativity