Book Review: The Grand Strategy of the Byzantine Empire by Luttwak 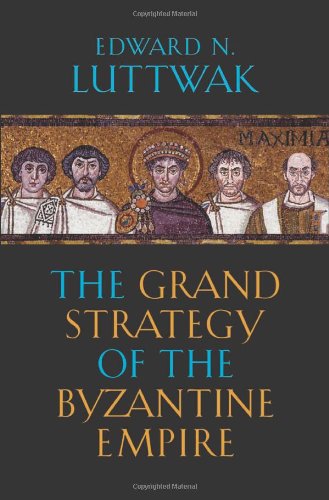 A quarter century in the making, eminent and controversial strategist Dr. Edward Luttwak has produced a tour de force work of scholarship that illuminates the little known (to laymen)  military and diplomatic vision of the Byzantine Empire while making a case for adopting some of Byzantium’s strategic posture to adapt to the challenges of today. A book intended to provoke as much as inform the reader, Luttwak’s epilogue, “Conclusion:Grand Strategy and the Byzantine ‘Operational Code”, which synthesizes the best elements of leading schools of strategic thought, is so good that it merits a separate printing of it’s own.

Luttwak’s central idea is that the Hellenic and holy Orthodox Byzantines, who forever saw themselves as “the Romans”, abandoned the grand strategic posture of the Roman Empire whose mighty legions were optimized to smash heavy infantry into the enemy, seeking not just a decisive victory, but the total destruction of the enemy. Facing a sophisticated peer rival in Persia and the endless steppes that vomited up unending waves of invading Huns, Avars, Pechnegs, Slavs, Bulghars, Bulgars, Turks and Mongols, eventually menaced by an ideologically motivated Islamic enemy, the Byzantines sought to conserve their strength by avoiding decisive battle.

As the position of the Empire meant that one destroyed enemy might be replaced by a worse successor, the Byzantines crafted a grand strategy that maximized stratregic alternatives to wars of attrition that the small, highly trained, well-armed, tactically versatile and irreplaceably expensive Byzantine army could ill afford. Diplomacy, espionage, bribery, assassination, recruitment of foreign proxies, strategic raiding, naval supremacy, manuver warfare and cunning strategems were all employed in preference to engaging in decisive battle. Today’s enemy might be tomorrow’s ally was a foremost consideration for the Byzantines, who took great care to lay down hard-won military wisdom in handbooks and manuals like The Strategikon or  De Re Strategica.

Where you sit in reading The Grand Strategy of the Byzantine Empire is likely to determine where you stand on it.

Luttwak has written a very interesting book about a historical subfield in which he himself is not an expert but has infused it with distillations of professional insight regarding strategy and warfare that no Byzantinist scholar and only very few military historians could have brought to bear. And importantly, never have tried to do so. Luttwak’s commentary on each of the surviving Byzantine military manuals, some only recently translated, for example, while repetitive for a lay reader is an important service for students of war and military strategy.

The empire lasted an exceedingly long period of time, as the Byzantines themselves reckoned it, from the 8th century BC to 1453 when the last Emperor Constantine died heroically fighting the final onslaught of the Ottoman Turks a mere 39 years before Christopher Columbus discovered the New World.  Luttwak is not a historian and makes no attempt to approach the subject as a historian would – something that might require multiple volumes or a very superficial treatment – and makes selections from Byzantine history to illustrate thematic points regarding strategy or, as with the digressions on the composite recurve bow and training of mounted archers, the complex relationship between technology, economics, military tactics and strategy.  To the reader interested in strategy and military history, Luttwak’s approach is efficient and sensible; for those interested in a comprehensive understanding of the Byzantines it makes for a highly idiosyncratic reading.

Nor does Luttwak make any pretense of bowing to rhetorical academic conventions. He does not soften his language anywhere, referring for example to the later wars between the Empire and Arab potentates as “jihad” and “crusade” and draws clear connections between the wars of Byzantium and the wars today with al Qaida, the Taliban and Iraq or the continuity between old  Persia and Ahmadinejad’s Iran. Luttwak freely injects modern terminology into archaic subjects and generally writes as he pleases, meandering whenever details of a topic interest him. His endnotes though, are a rich source of further commentary and observations and the bibliography runs for an additional seventeen pages.

This entry was posted on Monday, February 14th, 2011 at 1:55 pm and is filed under academia, analytic, ancient history, authors, book, DIME, history, ideas, intellectuals, military, reading, strategist, strategy, Strategy and War, war. You can follow any responses to this entry through the RSS 2.0 feed. Both comments and pings are currently closed.

2 Responses to “Book Review: The Grand Strategy of the Byzantine Empire by Luttwak”