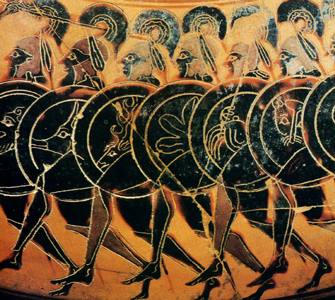 Reading Book IV with it’s numerous battles and sieges, particularly the plight of the Spartans trapped upon Sphacteria, made me reflect on how the Peloponnesian War must have looked from the perspective of “the grunt”, the Greek hoplite.

First, the average ancient Greek was not a particularly large fellow; from archaeological remains it seems that most Greek men were 5′ 5″ or less and a man was reckoned as tall if he were 5’7″ and very tall if 6′. As the Spartiates composed the top 10% of Sparta’s population and only Athenians wealthy enough to afford bronze armor – this seems to mark the start of the middle-class, at about 20 minae in wealth from land, chattel property or earned income – could serve as hoplites, we can assume they were better fed and slightly taller than average. On this relatively small frame (by modern standards) was loaded bronze armor, helm and a kit in total weighing approximately 60 pounds. This does not count the weight of the shield (hoplon) or the 7′ spear so in phalanx formation we have an infantry bearing into battle a load likely to be more than 50% than their body weight and for shorter men, upwards of 70%.  While the greatest glory was reserved for the hoplite in the front ranks of the phalanx, it was a lot less arduous physical labor to fight as a peltast and much safer to be one of the aristocrats in the cavalry.

Consequently, the weight of all this gear and armor necessitated Greek armies marching lightly armored and armed unless battle was imminent, leaving most of the gear and weapons in the baggage train. In The Anabasis, for example, Xenophon shamed mercenaries complaining of the pace by hopping off of his horse and marching fully armored alongside them until his men cried out to demand Xenophon return to his steed. When the Athenians gave the Spartans on Sphacteria no rest from their arrows, darts, stones and javelins, it was no joke. To be forced to keep shields constantly at the ready while trying to repel skirmishers by dashing at them in bronze armor is absolutely exhausting and these tactics broke the will of the Spartans to fight for the first time in Greek memory. It was third rate missile troops that allowed Cleon to make good on his seemingly impossible boasting and (with Demosthenes) win one of Athens’ greatest victories.

Logistics of course, were extremely primitive. The best way for an army up until modern times to stay well fed and healthy was to live off the land and keep marching. The “ravaging” mentioned by Thucydides is exactly that – looting and pillaging all that was useful from the enemy population and burning and destroying the rest. Which makes the confrontation at Pylos-Sphacteria all the more interesting because the ability to “ravage” was denied to both sides:

Meanwhile the Athenians at Pylos were still besieging the Lacedaemonians in the island, the Peloponnesian forces on the continent remaining where they were. The blockade was very laborious for the Athenians from want of food and water; there was no spring except one in the citadel of Pylos itself, and that not a large one, and most of them were obliged to grub up the shingle on the sea beach and drink such water as they could find. They also suffered from want of room, being encamped in a narrow space; and as there was no anchorage for the ships, some took their meals on shore in their turn, while the others were anchored out at sea. But their greatest discouragement arose from the unexpectedly long time which it took to reduce a body of men shut up in a desert island, with only brackish water to drink, a matter which they had imagined would take them only a few days. The fact was that the Lacedaemonians had made advertisement for volunteers to carry into the island ground corn, wine, cheese, and any other food useful in a siege; high prices being offered, and freedom promised to any of the Helots who should succeed in doing so. The Helots accordingly were most forward to engage in this risky traffic, putting off from this or that part of Peloponnese, and running in by night on the seaward side of the island. They were best pleased, however, when they could catch a wind to carry them in. It was more easy to elude the look-out of the galleys, when it blew from the seaward, as it became impossible for them to anchor round the island; while the Helots had their boats rated at their value in money, and ran them ashore, without caring how they landed, being sure to find the soldiers waiting for them at the landing-places. But all who risked it in fair weather were taken. Divers also swam in under water from the harbour, dragging by a cord in skins poppyseed mixed with honey, and bruised linseed; these at first escaped notice, but afterwards a look-out was kept for them. In short, both sides tried every possible contrivance, the one to throw in provisions, and the other to prevent their introduction.

Hunger and thirst will sap the will of an army to fight faster than the most fearsome enemy.

Being on the losing side or suffering injury in battle was an unenviable position in hoplite warfare. If there had not been a negotiated surrender with honorable terms, captives and wounded alike could easily find themselves being put to the sword, perhaps first seeing their wives and children raped and being taken away to be sold into slavery. The fallen on the battlefield (often the leading citizens) would be stripped, creating an urgency for a truce so that the important religious rituals for the dead could commence without further delay or disgrace. If one staggered home wounded and escaped septicemia, there was a fair chance Greek physicians could stitch your wounds and set broken bones, but if you lost your shield (in your haste to flee) you disgraced your family in the eyes of all. If you were a Spartan, depending on how you had conducted yourself, you might be branded a “trembler”, with a patch of cowardice sewn onto your red cloak.

War is hard; it’s a lot harder if you were a Greek hoplite.