“To flourish and grow in a many-sided uncertain and ever changing world that surrounds us, suggests that we have to make intuitive within ourselves those many practices we need to meet the exigencies of that world.” John R. Boyd, Colonel, USAF, Ret (1937-1997), Introduction to Conceptual Spiral Abstract

Friends, I’ve been noodling the intersection of ideas for the last couple of years. Based on the classic Boyd quote above (and other works), I’d offer that:

(2) a lack of respect/perspective for the differences between tactical and strategic uncertainty.

I’m not suggesting any sort of novel discovery, as I’m standing on the shoulders of several other authors/thinkers, but Boyd’s little introduction manages to provide a scaffold of thought we’d be wise study.

A Dystopian Trilogy Worth Your Time

Friends, In 2013 I read Hugh Howey’s Wool after reading an article in the Wall Street Journal. Howey’s is a cinderella story; he wrote his novel in installments at his blog, and his story, Wool was picked up by a publisher. The response was so overwhelming, Howey wrote Shift, which is a very good prequel and Dust picks up the story to the conclusion.

I gave away my paper copy of Wool  a couple years ago, but was pleased to see a graphic novel of the same title by Jimmy Palmiotti (Author), Justin Gray (Author), Hugh Howey (Author), Jimmy Broxton (Illustrator), Darwyn Cooke (Illustrator). The graphic novel filled in the gaps of my memory and helped visualize Howey’s imaginative and frightening new world below ground.

This trilogy is summer reading at its best. Story has duplicitous politicians, brave idealists and truly clever on-the-fly tactics—and a bit of not-too-syrupy true love. Howey is a gifted storyteller and weaves a credible yarn of a future where humanity is consigned to silos buried within the earth and surrounded by a poisonous atmosphere.

“Jack Hays“. Mr. Hays has considerable experience in a number of political and policy positions inside government and out and shares with the ZP readership our appreciation for history, strategy and other things further afield. Mr. Hays also has extensive time south of the border. He wrote this brief essay elsewhere and gave permission to share it.

From Matamoros to Managua live just under 170 million people. Their societies are coming apart. That doesn’t mean they are necessarily poor — especially in Mexico — though they frequently are. It does mean that for various reasons, be it the stresses of global trends, misgovernance, societal pathologies, historical causes, or beyond, their institutions are failing. It is likely no accident that this comes to pass in the generation after the era of autocratic parties and strong men. The succeeding era of democracy and pluralism is both liberating and rapacious: for many it has exchanged the danger of being killed by the state for the danger of being killed by nearly anyone. What arises in the aftermath is therefore exceptionally violent. It is not unfamiliar in human history: even at the most glorious moment of the Siglo de Oro, everyday Spanish life was also exceptionally violent. But that isn’t the right comparison: what you see in, say, northern Mexico or urban Honduras is less 16th-century Spain than 17th-century Germany — or 21st-century Damascus. It is a terrifying and brutal existence, and people quite rationally flee.

They especially flee when they are trying to protect children they love.

There is nothing — nothing short of murder — that deters flight and migration in those conditions. Therefore, there being still some things we won’t try, the questions arises: what will we try? If we aren’t going to take them in, what do we do?
What are you willing to have America do to stabilize these societies? The probable answer probably includes things like open or preferential trade. It probably includes aggressive engagement with local politics. It probably includes forcible imposition of our own law-enforcement institutions upon theirs. It may even include the use, in some form, of the United States military. None of this is speculative. All of it has happened before. All of it also ended in mostly the same way: there was a desultory clash of arms, the United States demanded certain things of local sovereigns, and events resolved when someone assumed autocratic control of the southern reaches.

But nation-building is precisely what is needed from Matamoros to Mexico. It is for their sake, and ours. The task is gigantic, and before the real crisis is upon us — which will involve millions on the move, not mere thousands — we still have time to undertake it. But we think it is about ourselves, we think they can govern themselves, we imagine we have anything more compelling to pressure them with than the things they fled in San Pedro Sula, in Ciudad Mier, in San Salvador, in a thousand over violent corners of an ancient and bloody land. We are wrong on all counts.

We act, or action is forced upon us. So what are you willing to do? 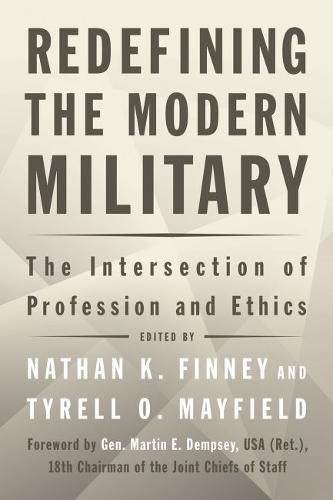 Friend of ZP, Nathan K. Finney who with Tyrell O. Mayfield are among the co-founders of the excellent The Strategy Bridge blog, have edited an important compilation entitled Redefining the Modern Military: The Intersection of Profession and Ethics (due out October 2018). From Finney and Mayfield:

Major Nathan Finney (USA) and Lt Col Tyrell Mayfield are founding members of The Strategy Bridge, an online professional journal for national security, strategy, and military affairs. The Strategy Bridge is in its fourth year of publication and has since incorporated as a 501c3 Non-Profit. Multiple The Strategy Bridge articles have appeared in PME curriculum.

In 2015 The Strategy Bridge ran a series on Profession and Ethics. Nate and Ty took 12 of the articles and worked with the contributors to expand them to chapters, and then edited the work into a book. The book, entitled Redefining the Modern Military: The Intersection of Profession and Ethics, will be published by US Naval Institute Press with a release date of 15 October 2018.

Gen (Ret) Martin Dempsey wrote the forward for the book, and it has been endorsed by Gen McChrystal, Admiral Stavridis, RADM Peg Klein, USN (Ret) former Senior Advisor to the Secretary of Defense for Military Professionalism, LTG Robert Caslen, USMA Superintendent, MAJGEN Mick Ryan, Commander of the Australian Defence College, and others.

This edited collection will expand upon and refine the ideas on the role of ethics and the profession in the 21st Century. The authors delve into whether Samuel Huntington and Morris Janowitz still ring true in the 21st century; whether training and continuing education play a role in defining a profession; and if there is a universal code of ethics required for the military as a profession.

Redefining the Modern Military is unique in how it treats the subject of ethics and the military profession, as well as the types of writers it brings on board to address this topic. The book puts a significant emphasis on individual agency for military professionalism as opposed to broad organizational or cultural change. Such a review of these topics is necessary because the process of serious, intellectual self-reflection is a requirement–especially in a profession that involves life and death of people and nations.

Our Navy has not experienced war against a peer competitor since 1945. War at sea differs significantly from what our Marine Corps and Army brothers have learned over the last 17 years. Naval warfare is attrition warfare, for at sea there is no place to hide. To quote the late strategist Herbert Rosinski: “At sea there is no halfway house between victory and defeat, because there is no difference between what is needed for defense and what for attack. One side only can gain security at the cost of the other—or neither.”

The United States Navy doesn’t have enough submarines (or surface ships, for that matter). Our highly capable fleet of SSNs is the best in the world, but we’re retiring the old LOS ANGELES Class boats faster than we’re replacing them with the VIRGINIA Class. These new submarines are expensive (~$2.5B USD) and the high costs are translating into fewer platforms with the number of attack boats shrinking from 50 today to as low as 42 by 2030—with only about 25 projected to operate in the Pacific—while China is building both SSKs and SSNs at a pretty aggressive rate with up to 70 attack boats on the horizon.

Under current forces structure plans and budgets the USN cannot afford the number of platforms needed to meet existing security threat requirements. Given our top-heavy force of large multipurpose warships, most are too expensive to send in harm’s way—but that does not change the need for presence. As William Beasley wisely suggested in the November 2015 issue of Proceedings, the US Navy needs to “close the presence gap.” Beasley “steals” a line from former Naval War College Dean CAPT Barney Rubel and defines “presence” — “it means being there.” Costs are limiting our numbers, thus our presence. As marvelous as the VA Class is (and it is a true marvel), it can’t be in two places at once.

The USN attack submarine force is all nuclear. These ships are complex and take years to construct—and only two shipyards are currently certified to build them. If many predictions are correct, in a future great power war we cannot assume the sanctuary of CONUS and these shipyards would make irresistible targets.

Our ally Japan may hold a potential subsurface solution which could be an almost “turn-key” solution to the USN’s presence crisis and the growing threat of China. The Japanese Soryu class submarine (pictured above) is the most advanced conventional submarine in the world and the first to transition to ultra-quiet lithium batteries for submerged operations. Further, these boat could be built for at least half the price of a VA Class.

Japan faces a common adversary in China, though without a Pacific Ocean buffer. What if we made a deal with the Japanese government to license the Soryu class design? Further, as part of the deal, construct boats for their navy in our shipyards. We would gain needed numbers and our ally would gain an “extra” production yard. This seems a great way to reassure our allies, increase our subsurface numbers, and send a message to the world that our bonds as allies are deep and resolute. This line of thought is not unprecedented, as we are building the next generation of SSBN (the COLUMBIA Class) in collaboration with the UK.

Whatever the USN decides (and doing nothing is a decision), time is growing short for alternatives and more of the same isn’t affordable.