UNDERSTANDING COGNITION: PART III. HORIZONTAL AND VERTICAL THINKING AND THE ORIGIN OF INSIGHT 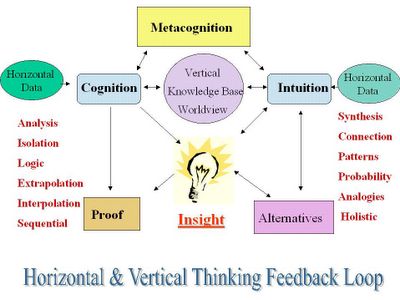 The discussion of Horizontal and Vertical thinking brings us to one of the most intriguing questions of cognition which science is starting to answer, what is the nature of insight ? Can we do anything to ” trigger” or increase the frequency of our ” Eureka” moments of true discovery when the pieces of the puzzle abruptly slip into place ? My argument is that insight is a biological event and that is triggered not simply by the stimulus of Horizontal thinking alone but by a feedback loop between Horizontal and Vertical thinking that is mediated by a cognitive activity that theorist John Flavell termed “ Metacognition“. Awareness of this insight process should allow us to intentionally construct environments that will increase the probability of generating insight.

Mankind has been aware of the existence of insight for thousands of years and most educated people are familiar with the story of Archimedes leaping from his bath shouting ” Eureka !” ( ” I have found it !”) at his sudden discovery of water displacement. Nevertheless, formally defining insight has proved difficult though everyone seems to recognize insight when they see it, much like the Supreme Court does with obscenity. From the inception of psychology it was questionable whether insight was actually a tangible process happening within the brain or merely a clever concept that described a chance event of recognition. Thanks to modern research the evidence is leaning strongly toward insight being a physical and identifiable brain function.

For some time it has been anecdotally and clinically noted that insight is not a randomly distributed phenomenon throughout the population. It tends to occur more frequently at the upper end of the bell curve; secondly, there are subgroups within the population such as schizophrenics whose abnormal brain function correlates with significantly lower levels of insight yet even here the degree of insight is affected by the schizophrenic’s educational level.(2)

Even greater weight must given to brain imaging testing of insight that have demonstrated that moments of insight correlate with revealed increased activity in the right hemisphere anterior superior temporal gyrus for insight relative to noninsight solutions. (3) The insight event is measurable and reproducible. A physical process is something that we can intentional attempt to trigger in real-world ” applied” settings and not just a research lab.

John Boyd wrote a laboriously researched, epistemological theory he called ” Destruction and Creation ” where he advocated ” smashing ” the conceptual borders of domains – i.e. Horizontal thinking directed synthesis – as the key to learning and the discovery of new ideas and this process was a continuous cycle, a ” dialectic engine “. (4) I believe that Boyd, without benefit of any advanced brain research data, came very close to finding the actual process of insight.

Where Boyd fell short was primarily in developing the details of his cycle. Horizontal thinking does not occur in a void but against an established body of knowledge with which every individual frames their interpretation of sensory information and symbolic communication. In other words, the data provided by Horizontal thinking must be integrated with a person’s Cognitive Map – the repository of Vertical knowledge and past experiences – to become of use.

The act of integration is really a process by which a person engages in both Vertical and Horizontal thinking, simultaneously or in sequence along with a reflective monitoring of their own thinking ( metacognition). To use a spatial metaphor, the Horizontal data gets ” rotated” mentally, measured for validity and placement ( Vertical thinking) or pattern similarity or potential relationships ( Horizontal) with known phenomena (5). When the significance of the data is understood and its logical parameters discovered the thinking process has crystallized into a moment of insight – an insight that can be empirically or logically tested or in turn may suggest other alternatives ( though seeking proof or generating alternatives can also precede and lead to the moment of insight).

If the Horizontal and Vertical feedback loop does in fact result in insight then I would hypothesize that combining horizontal and vertical thinking techniques is the road to becoming more insightful. We can attack our Vertical frames by a forced change of perspective, reversing premises, counterfactuals, brainstorming, forced association and similar techniques. Likewise, I believe that Novelty – starting anew in a different domain from the ground up instead of ” smashing” across it looking for analogous concepts – is the most powerful stimulus that Vertical thinking can offer to complement Horizontal thinking.

Renaisssance men make themselves, they are not born.

2. R MacPherson, B Jerrom and A Hughes. ” Relationship between insight, educational background and cognition in schizophrenia ” The British Journal of Psychiatry 168: 718 -722 1996.

ADDENDUM: The Eide Neurolearning Blog just happened to have a post on Novelty up today with four research links for further investigation.

This entry was posted on Thursday, April 28th, 2005 at 8:03 pm and is filed under Uncategorized. You can follow any responses to this entry through the RSS 2.0 feed. Both comments and pings are currently closed.