PART I – A PREFACE TO A DISCUSSION OF RULE-SET THEORY

Recently, Dan of tdaxp was kind of enough to do a thorough review of my article on Rule-Set theory that was published in the first issue of The Rule-Set Reset. Dan asked many good questions and raised lots of issues and after reading his review, I thought I owed him a detailed response. I intend to tackle Dan’s questions directly in Part II. after giving some background information on how my article originally came about.

Dr. Barnett had hired/partnered with Dr. Bob Jacobson to have Bob publish RSR and from conversation and innumerable email exchanges Bob indicated that one purpose of RSR would be to develop Rule-Set Theory as an operating paradigm for analysis. Shooting ideas back and forth before I started writing and then during the editing process we came to a point where we conceived of Rule-Sets as a series of concentric circles, with the smaller circles subject to the earlier, broader Rule-sets – ultimately in the center would stand the individual ( something I can’t show with my crude grasp of graphics – face it people, your damn lucky to even have this one – so I’m stopping at Explicit Rule-Sets, basically at the nation-state level, just as the article did) 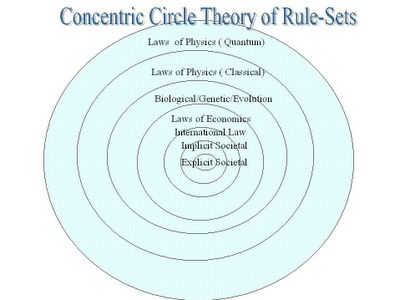 Eventually, we were supposed to connect all of these circles through a series of articles in a comprehensive theory of how Rule-Sets govern human interaction but are in turn dynamically evolving due to human action ( at least within those circles that humans can affect since obviously we can’t change the laws of physics). Bob would have preferred that I had started logically with the outermost circle and work inward but…well…and I didn’t feel quite up to that task being a humble historian rather than a physicist like Dr. Von. So I decided to write an article on an aspect of Rule-Set theory that was ” closer to home” in terms of my intellectual comfort zone. Critt liked it at any rate even if Bob had some reservations.

With RSR as dead as Julius Caesar, it’s not terribly likely that Rule-Set Theory will go much further along these lines unless Dr. Barnett decides to pick up that ball and run with it in some fashion. We’ll just have to wait and see what he wants to do. So there you have it, some PNM inside baseball.

This entry was posted on Sunday, May 15th, 2005 at 4:03 am and is filed under Uncategorized. You can follow any responses to this entry through the RSS 2.0 feed. Both comments and pings are currently closed.