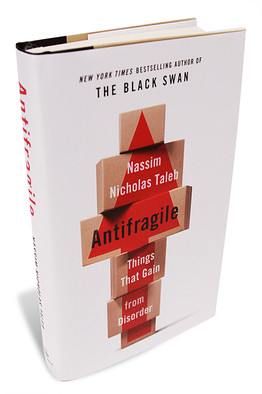 Antifragile: Things that Gain From Disorder by Nassim Nicholas Taleb

Taking a break for a bit from .mil topics in order to refresh my perspective on strategy and policy with new learning elsewhere. Reading a lot on creativity of late and a comprehensive post or paper may be the ultimate result.

Taleb’s book has been the focus of some interesting online exchanges elsewhere. Previously I wrote of Antifragile:

One of the  ”must read” books for 2013. I watched Taleb kick around some of the concepts in Antifragile on his Facebook page and then observed friends like co-blogger Scott Shipman and Dr. Terry Barnhart comment as they started reading shortly after the book’s release. There are many things in Antifragile (including, it seems, a fair piece on the epistemic deficiencies of Socrates) and this is a book to read with care – not least because I intuitively agree with a number of Taleb’s arguments which means reading with a critical eye will require more effort.

I like the “antifragile” concept. It’s useful. So I have my sharpie in hand as I read.

What are you reading these days?

This entry was posted on Thursday, March 28th, 2013 at 4:24 pm and is filed under authors, book, creativity, readers, reading. You can follow any responses to this entry through the RSS 2.0 feed. Both comments and pings are currently closed.