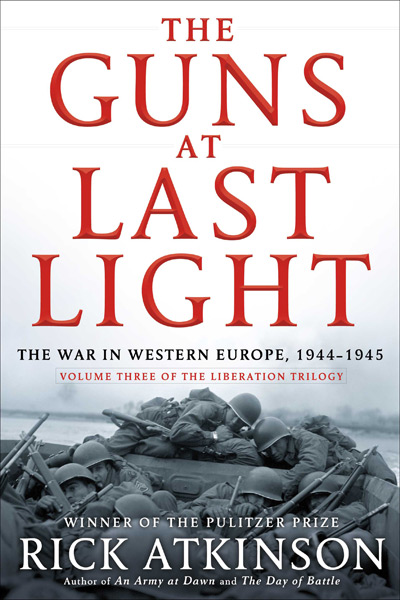 I have not read the first two books in Atkinson’s well-regarded Liberation Trilogy, but Guns at Last Light is a deeply researched work with over two hundred pages of end notes and selected bibliography, which feature a very substantial amount of primary source material. The campaign maps are richly detailed and photographs are ample.  The author has aimed to satisfy academic critics, military history buffs and popular audience alike.

In vol. III Atkinson is telling the story of WWII from D-Day to the aftermath of Hitler’s suicide in defeated Berlin to overcome the savage but futile resistance of the Germans:

Although the National Redoubt in the Alps was a brown pipe dream, makeshift bastions here and there stoked SHAEF’s fear of a Germany bent on self-immolation. In Aschaffenberg, Bradley reported that ” women and children lined the rooftops to pelt our troops with hand grenades” while wounded veterans hobbled from their hospital beds into the firing line. In Heilbronn, on the Neckar River, already smashed by years of bombing, German officers shot down Hitler Youth detachments when they broke under American mortar fire

An anecdote that is the same spirit of what can be read in Ian Kershaw’s The End. The Third Reich was ruled to the last by fanatical Nazi bitter-enders who kept the war going long past the point of any hope of a moderate defeat, much less a victory.

This entry was posted on Sunday, June 2nd, 2013 at 2:09 am and is filed under authors, book, historians, history, military history, war, wwii. You can follow any responses to this entry through the RSS 2.0 feed. Both comments and pings are currently closed.

2 Responses to “New Book: The Guns at Last Light”