On Iran’s Trend Toward Revolution 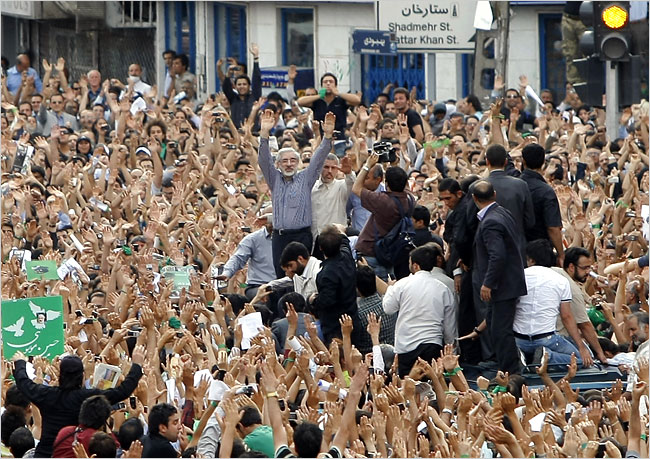 I am no Iran expert but it seems to me that the Islamist regime of Khameini and Ahmadinejad’s Pasdaran clique is soundly losing the information battle to “own” Iran’s critical cultural-political  myths, rooted in Persian history and Shia Islam, to Mousavi’s Green opposition.

Here’s a piece from an Iranian journalist at al Jazeera:

Some influential moderate clerics privately admit that Khamenei has not done “justice” to the presidential candidates and has not treated them with impartiality.

This behaviour, they believe, could jeopardise his position as leader since one of the main qualities required of the supreme leader is “justice”.

In an Iranian context, the requirement for justice in a ruler is a pre-Islamic, Persian concept known as “farr”. While somewhat ambiguous, it is akin to both the Confucian concept of a mandate of heaven and the Western notion of a social contract. I’m sure an Iranianist might quibble with me here ( please weigh in, if you are reading) but the point is that is their cultural bedrock of political legitimacy. To be “unjust” is like an American president seen to be repudiating liberty. Khameini has made himself appear as he actually is and has always been since his days as Khomeini’s political valet – a tyrannical and hypocritical partisan politician in religious robes.

Secondly, from Shia Islam comes the central idea of martydom of the virtuous. Shooting protestors, notably the young woman Neda, ramps up the sense of persecution and martyrdom that is deeply rooted in Iranian culture. Imagine the Kent State shooting on steroids.

Iran’s hardliners may or may not prevail but right now the protestors are clearly inside the regime’s OODA Loop.

This entry was posted on Monday, June 22nd, 2009 at 7:36 pm and is filed under 2009, 5GW, basij, democracy, dictator, foreign policy, freedom, iran, islamist, legitimacy, myth. You can follow any responses to this entry through the RSS 2.0 feed. Both comments and pings are currently closed.

One Response to “On Iran’s Trend Toward Revolution”