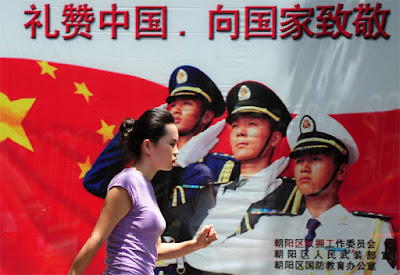 Top Billing! Steve Clemons – If You Could See America Through China’s Eyes

Clemons sheds light on a hardheaded, quasi-official, Chinese analysis of the strategic direction of American power. A must read piece.

Several years ago, I met with the Deputy Director of the Policy Planning staff of China’s Ministry of Foreign Affairs, and I asked him what he was working on — and what China’s grand strategy was.

His reply: “We are trying to figure out how to keep you Americans distracted in small Middle Eastern countries.”

It’s pretty memorable when one can joke and be truthful at the same time. China has had opportunities throughout the world open up to it easily — mostly because of systemic American inattention to much else beyond its war slogs. The Obama administration, which in its first year in office, has managed high level presidential and cabinet level face time with leaders around Asia, Africa, Latin America, and the Middle East has done a lot to correct the impression from the G.W. Bush years that America has completely checked out from the rest of the world — but there still is a sense that American pretensions in the world are more veneer than real.

This is a very sobering “offshore perspective” on American power.

This is the sole exception to the topical focus on China today. A brutally frank examination of our core problem with Pakistan’s elite.

….Meanwhile, Serajuddin Haqqani, the leader of the network, in an interview with Aljazeera TV claimed the responsibility for the attacks on the heart of Kabul on 18 January.  Afghan Police investigations and arrests following the attack also confirm that the Haqqani network was behind the raid which left 5 killed and 17 injured.

It is also important to note that General Parvez Musharraf as well as General Ashfaq Kayani had described Haqqani network leaders as Pakistan’s “strategic assests”.

Thomas P.M. Barnett –  A Bad Time to Wreck Our Relationship with China

Dr. Barnett puts the geoeconomics into the geopolitics and security of the Sino-American relationship….

…..But middle-class doubt and vulnerability have now coalesced into populist anger. And in responding to it, the Obama-Biden team seems dangerously intent on re-vectoring a foreign policy anchor of Bush-Cheney — namely, the bilateral relationship with China. Ironically, the Bush administration’s policy toward China was arguably its smartest and most sophisticated endeavor. A century from now, our nation’s interventions in Iraq and Afghanistan will be mere historical footnotes, whereas our decision to accommodate China’s rise to the rank of global superpower will undoubtedly rank as the single most important decision made in this era by any state.

….Such strategic patience, however, is hard for any president to maintain — especially in these days of profound economic angst. Critics predictably claim the White House has given up on human rights, surrendered to authoritarian capitalism, and accepted our nation’s inevitable decline. None of this is true, of course, and yet all these hyperbolic charges carry with them the air of deep-seated grievances: Americans increasingly feel that globalization — which we created, nurtured and defended — is no longer to be trusted. Despite the fact that our share of global GDP has held amazingly steady since 1975 (26.3 percent then, compared to 26.7 percent last year), many Americans continue to assume China’s rise comes at our expense.

HistoryGuy99 is recently returned from China, which he has visited many times, and reflects judiciously on the contradictions of China’s status as an ancient country but a “young” great power

Minxin Pei – The Real Lessons from the Google-China Spat

….Although recent events might tempt many to tell Google ‘I told you so,’ the company has still garnered sympathy around the world for standing up to Beijing. And anyone who cherishes the wealth of information generated by unfettered Google searches and hates the idea that secret police might have access to the keys to their e-mail boxes should indeed wish Google luck.Yet, regardless of the outcome of this contest between a politically vengeful autocratic government and a technologically savvy US firm, the Google episode will likely remain a crucial moment in China’s relations with the West in general, and with Western companies doing business in China in particular.

….The Chinese leadership appears to accept at least a nascent version of this wind of change, as it were and are flexing the new found confidence of an emerging power. China’s belligerence during the Copenhagen Climate Conference, staunch opposition to sanctions on Iran, loud protests of a US/Taiwan arms deal and the subsequent threat of sanctions on US firms selling those weapons suggest a state looking to call attention to its own considerable might. Indeed a recent poll suggested that a majority of Chinese foresee a “cold war” with the United States, suggesting the specter of another global bi-polar century

The Committee of Public Safety –  How to Bugger With the United States ( Hat tip T. Greer)

TDAXP – Review of “Stilwell and the American Expeirence in China, 1911-1945,” by Barbara Tuchman and “The Generalissimo: Chiang Kai-shek and the Struggle for Modern China” by Jay Taylor

Great review by Dan of TDAXP. I too read the Tayor book and second Dan’s recommendation.

Foreign Affairs (Yang Yao) – The End of the Beijing Consensus

An optimistic view of China on the path to middle-class political liberalization.

Two well-considered posts from 2009 and 2005 respectively by Dave Schuler who has been a China-watcher for decades.

From 2009 – and with this post, Recommended Reading comes full circle.

This entry was posted on Tuesday, February 16th, 2010 at 3:34 am and is filed under china, recommended reading. You can follow any responses to this entry through the RSS 2.0 feed. Both comments and pings are currently closed.