James McCormick is a long time member of Chicago Boyz  blog and is the author of many a stellar book review.

Word came early last week from the Washington Times and Washington Post, while I was away on vacation, that Ishmael Jones, pseudonymous author of The Human Factor: Inside the CIA’s Dysfunctional Intelligence Culture would be sued for breaking his secrecy oath.

I reviewed Jones’ 2008 book here on chicagoboyz in April, and followed it up more recently with a late September review of a similar book by Canadian “Michael Ross” on his time with Mossad.

I found both books surprisingly revelatory about the organizational culture of these two intelligence organizations, but found little that would interest the James Bond crowd, or be of much value operationally to foreign governments.

Jones’ book was by far the most damning, however, because he illustrated (with incidents from his own deep-cover career) the extent to which the CIA now operates for its own bureaucratic benefit with minimal attention to its central mandate – gathering actionable intelligence. All the most virulent criticisms of the Tea Party against big government are understatements when it comes to how national 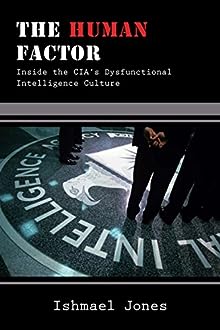 security has been subordinated to the HR nostrums of the day at CIA. Jones effectively outlined how “the emperor has no clothes.” Not so much inept as indifferent. As someone operating under “deep cover” in the clandestine branch, away from the support and comforts of consular life, he was certainly qualified to note the career paths and day-to-day obsessions of the “home office” and his colleagues. While he didn’t name names, he described enough duplicity and lassitude in the CIA’s management and staffing to earn the undying enmity of “tap dancers” and “clock watchers” alike.

Most notably, Jones outlined in some detail how the vast number of clandestine officers that were supposedly hired and deployed by the CIA post 9/11 (at huge expense) were posted to the continental US. Numbers were further bulked up by counting support staff as “officers.” Meanwhile, CIA clandestine officers already in the field overseas at the time were being methodically hindered and removed to avoid bureaucratic risk. Jones contrasted this institutional predilection with his time in Iraq as part of a largely Army team of intelligence agents.

Apparently the Panetta CIA will now conduct lawfare against one of its own, after having done so much to limit his success when he was overseas secretly working on WMD proliferation. No good deed goes unpunished. Execute the messenger when the news is bad.

It’s still early days in the legal matter. I’ve not seen any indication that Jones’ legal team has formed a strategy for protecting or saving their client. Goodness knows Jones’ pocketbook will necessarily take a massive hit, as may well be the intent of the suit in the first place. Having spent years delaying out-of-pocket reimbursements during Jones’ active clandestine career (to the tune of tens of thousands of dollars), it’s only appropriate that the CIA would try to take back what they did pay him. Pour encourager les autres.

After risking his life overseas, there’s some irony that his own employers will hold him accountable for leaking their institutional dysfunction, rather than any actual secrets.

Will a change in control of the House mean that the CIA finds itself under Congressional scrutiny for misleading elected representatives about how they were spending billions of dollars? One would imagine that Jones’ defense lawyers will be dropping hints about the potential perjury committed by his CIA managers testifying on the Hill over the last decade. Be a shame if something should happen to all those shiny careers. Horse-trading ahead, I assume.

The intelligence agency that works safest, works not at all. And a CIA entirely based in the US or ensconced behind the walls of embassies can look busy without actually being busy. The current CIA bureaucracy, for entirely understandable reasons, has preferred Potemkin villages and iron rice bowls to aggressive intelligence-gathering. Jones’ misfortune is to have been a witness to it all. I hope this all turns out OK for him.

My mini-book review offers additional details for those with an interest in intelligence organizations.

This entry was posted on Thursday, October 28th, 2010 at 4:24 am and is filed under America, analytic, authors, book, chicago boyz, CIA, dystopia, Failed State, government, IC, intelligence, legal, legitimacy, Oligarchy, politics, reform, Republic, society, state failure. You can follow any responses to this entry through the RSS 2.0 feed. Both comments and pings are currently closed.