The Knowledge by Steven Pressfield

Long time readers know that noted novelist Steven Pressfield is a friend of this blog and that in turn we are big fans of Steve’s work, both his fiction and non-fiction masterpieces like The War of Art. Pressfield has a new novel out, one inspired by his struggles outlined in The War of Art and Steve was kind enough to send me a copy which arrived the other day.

What is The Knowledge about? From the book jacket insert:

Where did The War of Art come from?

How did creativity sensei Steven Pressfield come up with the notion that there is an insidious force in the universe called Resistance that keeps us from pursuing our life’s work and fulfilling our artistic destiny? And that until we recognize and engage in an end-of-days battle with the big “R,” our inner genius will remain blocked and unborn inside an internal protoplasmic goo?

Was he touched by angels as he contemplated the universe in an ashram?

Did he meet a mysterious stranger in a truck stop in Twin Falls, Idaho who imparted deep truths over a cup of muddy Joe?

Perhaps blunt force trauma in a Reno bar had something to do with it?

As his “too close to true novel,” THE KNOWLEDGE, riotously reveals, the truth of Pressfield’s Weltanschauung origin story lies somewhere between fact and fiction…

In the high-crime 1970s in New York, Pressfield was driving a cab and tending bar, incapable of achieving anything literary beyond the completion of his third-in-a-row unpublishable novel. Until fate, in the form of a job tailing his boss’s straying wife, propels him into a Big Lebowski-esque underworld saga that ends with him coming to a life-altering crisis involving not just the criminals he has become deeply and emotionally involved with, but with his own inner demons of the blank page.

If you’re a fan of THE WAR OF ART, Pressfield’s new novel, THE KNOWLEDGE, is the story behind that story and the origin tale between its lines.

I love the novel’s setting. Most people have forgotten that in the 1970’s, New York City had come to symbolize American decline and decay. It was a rough place over which the Five Families held sway, where the police department was riddled with corruption, crime was rampant and several thousand murders took place annually. Here was the Bronx at the time The Knowledge takes place: 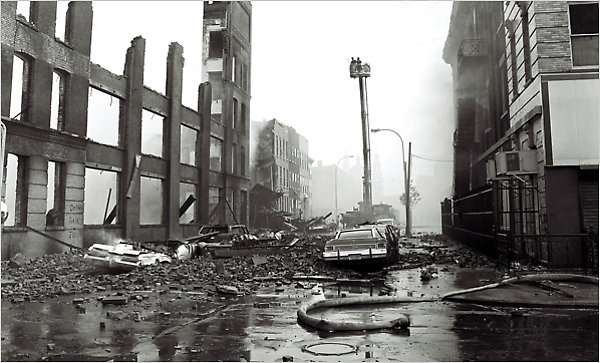 This was the New York of Abe Beam, the Five Percenters, of a young and rising Donald Trump and an ancient and fading Robert Moses. This is where Steven Pressfield gained The Knowledge.

I look forward to reading and reviewing it here soon.

This entry was posted on Sunday, December 4th, 2016 at 4:36 am and is filed under authors, book, reading, steven pressfield. You can follow any responses to this entry through the RSS 2.0 feed. Both comments and pings are currently closed.

2 Responses to “New Book: THE KNOWLEDGE by Steven Pressfield”