[ by Charles Cameron — the Phoenix Field Office of the FBI has already suggested QAnon should be considered a terror threat — now two writers in quick succession suggest it qualifies as, or indeed contains, a new religious movement ]
.

I’d like to draw the attention of my New Religious Movement (NRM) friends and those working on extremism to three recent posts concerning the QAnon conspiracy as a new religious movement:

The Atlantic article, by Adrienne LaFrance, is the most wide-angle of the three. Let’s start with her rough description of QAnon, pitched to its political side:

Nine years later, as reports of a fearsome new virus suddenly emerged, and with Trump now president, a series of ideas began burbling in the QAnon community: that the coronavirus might not be real; that if it was, it had been created by the “deep state,” the star chamber of government officials and other elite figures who secretly run the world; that the hysteria surrounding the pandemic was part of a plot to hurt Trump’s reelection chances; and that media elites were cheering the death toll. Some of these ideas would make their way onto Fox News and into the president’s public utterances. As of late last year, according to The New York Times, Trump had retweeted accounts often focused on conspiracy theories, including those of QAnon, on at least 145 occasions.

What’s interesting about this article, and will be missed by many analysts and other readers because they are blind to religion, is the religious emphasis present from the title, The Prophecies of Q, through the italicized intro, with its subhead “Genesis”, its talk of “adherents” and a “clash between good and evil” and “Great Awakening” that is coming — shades of the “Great Awakening” that Jonathan Edwards was associated with! Indeed, the eschatological (end times) content is even more explicit:

QAnon carries on a tradition of apocalyptic thinking that has spanned thousands of years. It offers a polemic to empower those who feel adrift.

“There are QAnon followers out there,” Shelly said, “who suggest that what we’re going through now, in this crazy political realm we’re in now, with all of the things that are happening worldwide, is very biblical, and that this is Armageddon.”

Too, there’s the suggestion that QAnon effectively comprises a system of belief, enshrined in the closing, one line paragraph:

You know all this because you believe in Q.

And the next day, the Atlantic took things a declarative stage further, heading a note:

QAnon Is a New American Religion

Okay, QAnon Is [according to the Atlantic] a New American Religion. But Marc-André Argentino‘s approach is more tight-focused: he actually attends “ekklesia” [roughly, here, “house church”] services with strong QAnon content over a period of a couple of years, and reports back:

Here are a couple of samples:

At a service held on April 26, Wagner and Bushey spoke about a QAnon theory, called Project Looking Glass, that the U.S. military has secretly developed a form of time-travel technology. Wagner suggested to e-congregants that time travel can be explained by certain passages in the Bible.

On May 3, the theme of the QAnon portion of the service was about COVID-19. Bushey spoke about a popular QAnon theory that the pandemic was planned. (There is no evidence of this.) And when an anti-vax conspiracy theory documentary called “Plandemic” went viral , the video was shared on the HCW websites as a way for e-congregants to consume the latest in a series of false theories about the coronavirus.

It’s going to be Biblical

— where Biblical is intended both literally and metaphorically — enormous!!

This is emphasized in large letters on a greenboard reproduced in Argentino’s subsequent twitter thread, which is also used for four panels explaining the parallels between the Biblical Passover and “Passover II” associated with QAnon, of which I’m reproducing on here: 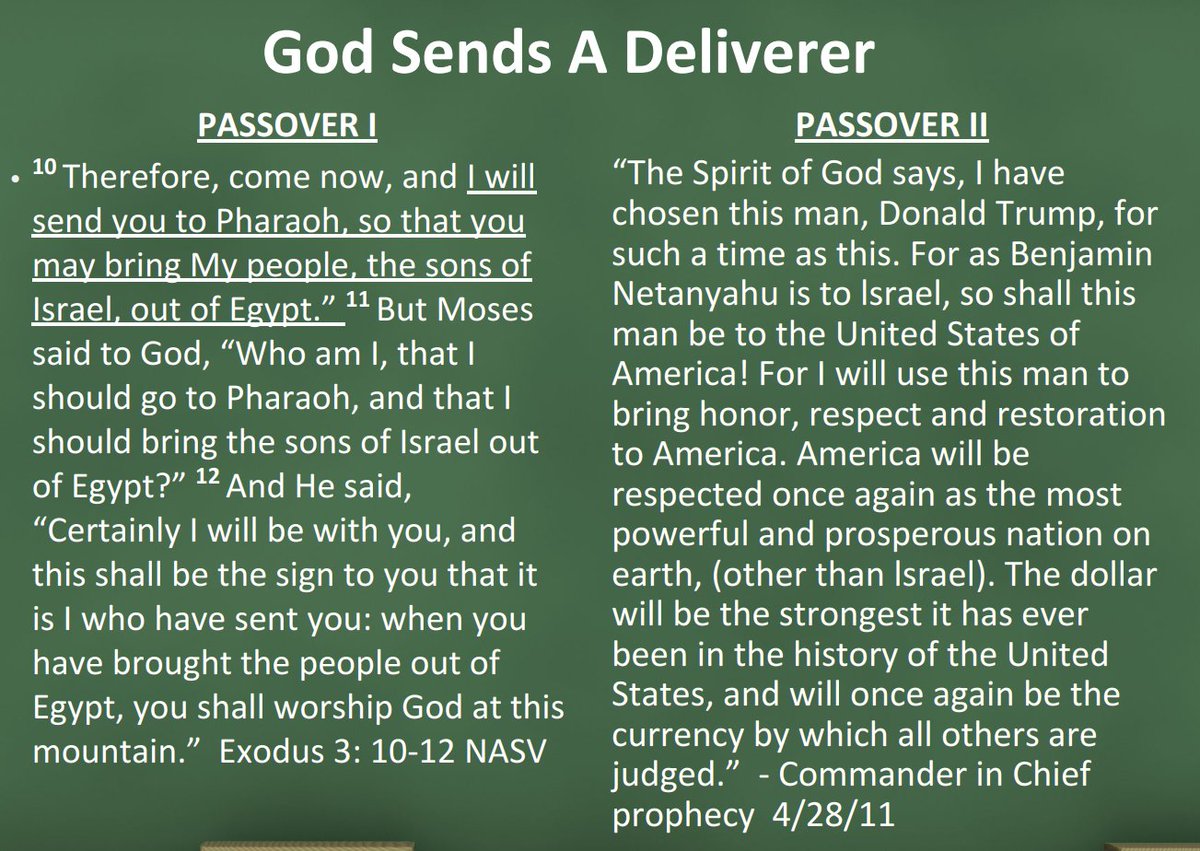 The rhetoric here, “For as Benjamin Netanyahu is to Israel, so shall this man be” is nicely reminiscent of Romans 8:14, James 2:26, and [forgive me] I Corinthians 11:12, “For as the woman is of the man, even so is the man also by the woman>”

Whether or not the entire QAnon movement as a whole can be considered a NRM [New Religious Movement], there certainly exists within it an ekklesia and ministry.

NRM scholars, as well as FBI agents and other terrorism analysts, should keep their eyes on the QAnon phenomenon.

This entry was posted on Thursday, May 21st, 2020 at 6:12 pm and is filed under Apocalyptic, Charles Cameron, conspiracy theory, judaism, QAnon, scriptures, Uncategorized. You can follow any responses to this entry through the RSS 2.0 feed. Both comments and pings are currently closed.