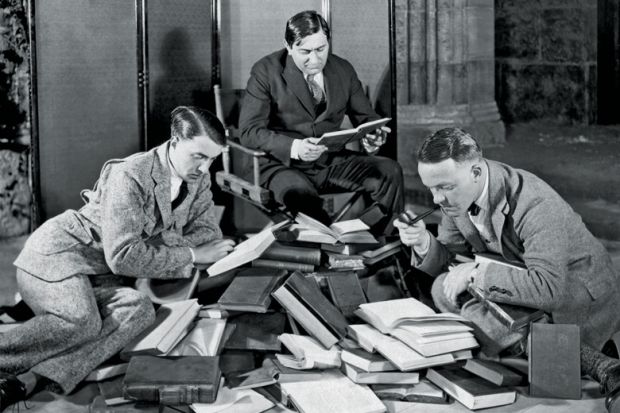 In the previous two installments, I provided an overview of fiction books used in military education, and then a synopsis of the Future History fiction series that sprang from the brow of Jerry Pournelle and John F. Carr, with a little help from their friends. Now I will turn to specific examples of how these brilliant and entertaining books treat grand strategy, strategy, tactics, and even logistics. [Definitions thereof taken from Stephen Morillo, What is Military History?]  In doing so, I hope to make a cogent and convincing case that at least some of the 20+ books that make up the galactic backstory of the superb novel The Mote in God’s Eye should be part of American professional military education.

Let’s start at the top, with grand strategy—which is “where warfare and politics merge: a country’s grand strategy in a war describes its goals not strictly in military terms but in political, economic, or even cultural terms with military action, including strategy, seen from this perspective as one tool, with diplomacy, bribery, marriage alliance, and so forth, of grand strategy.” (Morillo is great on substance, but he does tend toward run-on sentences.) In the Pournelle-Carr universe, the best example of this is the centuries-long struggle between the Empire of Man, on the one hand,  and Secessionist systems led by the genetically-engineered Saurons, on the other. This is covered in detail in John Carr and Don Hawthorne, War World: The Battle of Sauron (2007).  Although the actual war between the “cattle” of the Empire (as the Saurons derisively refer to normal humans) and the future übermensch lasts only 37 years, the conflict actually lasted for centuries—Sauron was part of the Co-Dominium-undermining “Brotherhood” of planets, and engaging in outlawed genetic engineering, by the mid-21st century. Five hundred years later, not only are all Saurons enhanced, but in the 2400s they began creating Cyborg “super-soldiers.” But open military conflict does not erupt until the early 27th century. For some years prior to that Sauron was the leader of the Secessionist movement of planets demanding the right, in the Imperial Parliament, to withdraw from the Empire. Much of the Secessionist dissatisfaction is with the Empire’s taxation and perceived heavy-handedness; but there are also the usual political squabbles, as well—with “Claimants” to the Imperial throne advancing their right to rule, while also carving off quadrants and systems as their own fiefs. (Roman, or for that matter Ottoman or Ming, imperial history transferred to the future and an interstellar setting, in other words.) The Saurons, of course, see themselves as not just the rightful rulers of humanity but the next step in human evolution. And normal humans as simply breeding receptacles and drones for them. The Empire, for all its flaws, is the only hope for humanity to avoid slavery—or worse. So it engages in intense propaganda against Sauron, branding its people as monstrously supremacist. Yet this succeeded because it was largely accurate. Also, in a brilliant stroke that helped win the war, the Imperial center on the planet Sparta granted amnesty  to traitorous Secessionists—who then brought their fleets of spaceships to assist the Imperial forces in not only defeating space forces of Sauron, but in destroying all life on the planet. Although one ship of Saurons escaped, the existential threat to normal humanity was ended—but at the cost of the First Empire collapsing shortly afterwards. As Galen Diettinger, the commander of the lone surviving contingent of Saurons (and a surprisingly sympathetic figure, as devised by Carr and Hawthorne), remarked:

“we led a totalitarian state into war against a representative Empire, a republic in all but name. Hannibal’s ironic victory was that his actions forced the Romans to adopt policies that did doom their Republic….” Likewise for the First Empire of Man.

Other great examples of grand strategy in the Pournelle-Carr Future History series are the accounts of the later 21st century attempts by Grand Admiral of the CoDominium Fleet, Sergei Lermontov, to deploy elements of the CoDo Marines—in particular the 42nd Marine Regiment commanded by Colonel John Christian Falkenberg, which had been decommissioned and turned into a mercenary outfit—to prevent any other colony planets’ military forces from rising to challenge to CoDominium.  And to help ensure stability on key planets so that society will survive on them once the CoDominium inevitably collapses. Lermontov’s grand strategic goals were largely successful.

A level down from grand strategy is strategy: “the level of military action and analysis that has to do with deciding the objectives of operations in specific theaters.” There are legions of examples of such (pun intended), many of which involved the aforementioned Colonel Falkenberg. In particular, two of his brilliant campaigns are worth studying in this regard. One, on Haven, against a Muslim leader claiming to be the Mahdi. (See Carr, War World: Falkenberg’s Regiment, 2018, as well as Carr, ed., War World: Jihad!, 2013). Another, on New Washington, which is trying to stave off conquest by another colonized planet in the same solar system, Franklin—the latter employing its own mercenaries, infantry from the Scottish planet Covenant and armor from the German-settled Friedland. (Laid out in Pournelle and S.M. Stirling, The Prince, 2002).

Haven is the setting for many of the War World stories.  It’s actually a (barely) habitable moon of a gas giant, quite cold and with thin atmosphere. It’s also, in the 21st century, the most distant colony from Earth—some 65 light-years away, which takes a year or so to reach. That makes it a convenient dumping ground for Earth’s undesirables and criminals; so “BuReLoc”—the Bureau of Relocation—transports many such there. Haven is also a very important source of several crucial minerals, as well as precious stones. And there’s a sizable presence of a new religious sect, the Church of New Harmony. In 2075 an Arab Muslim, Tawfiq al-Talib, is proclaimed Mahdi and begins a jihad on Haven—supported, behind the scenes, by the Arab planet Levant. He finds willing troops, as 60% of Haven’s 4.5 million population is Muslim. Falkenberg’s 42nd is sent to bolster the 77th Marine regiment already on Haven. They also bring in a Gurkha battalion from Earth, and arm miners’ militias. But the CoDo forces number at most 15,000, and face at least 200,000 Mahdists.

Thus, Falkenberg relies on innovative—if politically incorrect—tactics and logistics. The former are “what armed forces use in combat. They can be offensive (a cavalry charge, a tank attack, etc.) or defensive (a shield wall, digging a trench, or occupying a fortification, among other tactics)…. Tactics can also apply to ship-to-ship combat…and air-to-air….”).  The latter are “how armed forces are supplied, both in peacetime and on campaign.” It is important to realize “how significantly the strategic choices supposedly open to commanders [are] constrained by the potential availability of food and water sources….”  For example, Colonel Falkenberg leverages the latter by dropping pig carcass parts into every well, oasis and spring on the northern plains where the Mahdi’s supporters live, thereby effectively denying his hundreds of thousands of men potable water. The Mahdists persevere and attack a CoDo fort along a river. “In preparation for this mines had been laid in the shallows and along both banks. At the spot where the guns and rockets were all zeroed in, stakes had been planted at an upstream angle with their sharpened ends just beneath the faint ripple of current…. Their principal purpose was to deflate the [Mahdists’] rubber rafts and create maximum confusion at this point…. As the Mahdi’s forces predictably jammed and clotted among the stakes…the artillerists up at the fort made their contribution, proximity fuses spreading shrapnel at an optimum height….” (Falkenberg’s Regiment, p. 141). “By the third time this maneuver had been pulled off, the river—temporarily  dammed by the corpses of the Mahdi’s finest—had stopped flowing….” (p. 142).  Some time later the Marines took on the Mahdi’s Bedouin forces in a non-siege situation. “The Arabs, used to the Haven militias’ hunting rifles, had not expected men with automatic weapons. At the first shot they rushed. The Seventy-Seventh’s men responded with traversing fire from two light machines guns and something over a hundred automatic rifles. Fifty of the Mahdi’s men went down in the first few seconds before they realized their mistake….” (p. 165).  And so on.  The Mahdi’s forces are squeezed logistically (Falkenberg also has his forces round up, or kill, herd animals), goaded/lured into attacking CoDo armed nodes, then eventually cut off from their outside support. So he Mahdists are eventually defeated—but you’ll have to read the book to find out exactly how.

On New Washington Falkenberg’s forces effectively win the war via a mixture of subterfuge and relentless attack. Unlike the campaign on Haven, this was a clash of modern forces and conventional tactics. First Falkenberg’s men took the main enemy (Franklin) fortress by pulling off a Trojan horse maneuver: hiding soldiers inside boxes marked “commissary supplies,” who then emerge in the middle of the night to open the gates to the 42nd’s main forces. Falkenberg then sent the regiment north into a heavily-populated river valley, which motivated many of the local ranchers to turn out with their weapons in support. (It also gave the New Washingtonians control of the most fertile food producing area.) But their main objective, carried out, was to move artillery pieces several hundred kilometers north in order to cover the Friedland tanks moving west, through the only possible route, to attack his forces. That armored brigade was decimated by artillery strikes, and so too was the enemy infantry. These mercenary units then surrendered. Once the occupying power (Franklin) had lost these purchased forces, it could no longer hold on to New Washington with its own military. The strategy worked perfectly to undergird the grand strategy: “Neutralize this planet with minimum CD [CoDominium] investment and without destroying the industries.” But ensure that neither Franklin nor New Washington would be able to build their own space fleets for some time.

Such are just a few examples of grand strategy, strategy, tactics and logistics from the Pournelle-Carr Future History series. Per David Webb, whom I quoted in my first installment: these are engaging and thoughtful stories which “portray the military within a science-fiction context.” They are not “bug-shoots.” They are “about human beings…caught up in warfare and carnage.”  The many War World books; The Battle for Sauron; the 1000+ pages of The Prince—all are just as worthy of study by America’s professional military as Ender’s Game or Starship Troopers. In fact, I think the many volumes comprising the back history to The Mote in God’s Eye are, in fact, more worthy of gracing the reading lists of the service Commandants, the military academies, and the war colleges. Don’t believe me? Read some yourself.

This entry was posted on Tuesday, July 6th, 2021 at 3:40 am and is filed under authors, book, military, science fiction. You can follow any responses to this entry through the RSS 2.0 feed. Both comments and pings are currently closed.