Theory and Practice, Ideal and Real, War and Peace

A confluence in my infostream this morning:
. 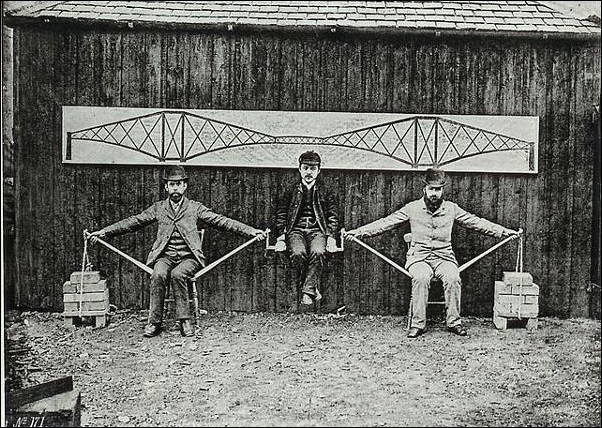 Let’s start with this brilliant example of theory (the diagram of the cantilever principle, above) and practice (the human demonstration, below). In the above instance, at least, the theory works out in practice. BTW, I think this image qualifies as a DoubleQuote in the Wild.

There’s a problem when things just don’t work out that way, however, and Cardinal Richelieu nails it:
.

Theory is often too simple to match practice, and attempts to fit the real world into a crippling procrustean box of its own devising.

I might not have taken an interest in these two tweets, if I hadn’t also read Ahmed Humayun‘s post, The Politics of Barbarism, on 3 Quarks Daily today, and blog-friend Omar Ali‘s comments in particular.

Humayun’s piece is essentially a precis and analysis of Abu Bakr Naji‘s The Management of Savagery, a book, incidentally, which has as much to do with management as it does with savagery.

But to get to the point which interests me, one Raza Husain commented that in place of recent wars in Afghanistan and Iraq:

A trillion dollars on development work, schools, hospitals, roads, power plants, would have been money better spent and possibly just as helpful to the American economy if not to the arms industry in particular.

to which Omar responded:

A trillion dollars spent through what state apparatus? protected by what army? under which laws? (not saying it cannot be done, but those questions need answers first, otherwise how will the money actually get spent where you want it spent?)

And that’s it, right there.

If I was to DoubleQuote that, my pairing quote would be from John Adams:

The Ideal and Real are, respectively, Theory and Practice, and we need, we are constituted to need both — and yet our discourse all too often promotes one (shorthand: peace) or the other (shorthand: war), without looking at how each can serve and illuminate the other.

For my purposes, it is essentially peace that is the objective, and war that should (where and when needed) serve it: but it is justice, as in peace with justice, that is the necessary third term bringing peace and war (to include revolution?) into their constantly shifting alignment.

If one group of people chants peace, peace, while another prepares for, and makes, war — without justice rather than profit being its central motivation and the arbiter of its outcomes — there’s little chance of mutual understanding. The peaceables will think the warlikes lack “moral” sense, the warlikes will think the peaceables lack “common” sense, each side will seem senseless to the other — and the wheel will continue to turn.

What I would like to see — to foster — is deliberation, debate, discourse between these two camps, the idealists and the realists (and I use those terms without their technical senses as terms of art), those who would seek peace and those who would protect them from violence.

Because humanity is half-angelic, half-bestial, and the question is how the angelic can best deploy against the bestial. Or as Naji has it, against Savagery.

There are two distinct scenarions that I try to bear in mind, in one of which an archipelago of islands is seen in a seascape, while the other shows a number of lakes in a lanscape of mountains, hills and valleys.

The only difference between them, as I envision them, is the water level.

The quest, here, by analogy, is for optimal levels of protective violence to obtain and sustain a widespread and liveable landscape of peace.

This entry was posted on Monday, January 26th, 2015 at 7:14 pm and is filed under 3QD, book, Charles Cameron, Doublequotes, ideal, Omar Ali, Orwell, peace, real, theory, Uncategorized, war. You can follow any responses to this entry through the RSS 2.0 feed. Both comments and pings are currently closed.

35 Responses to “Theory and Practice, Ideal and Real, War and Peace”