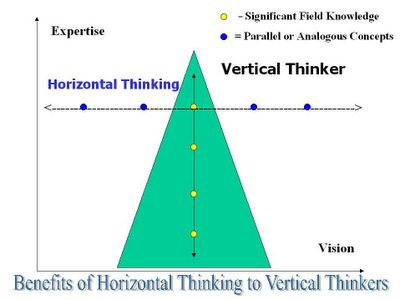 Those who follow PNM theory already know that Dr. Thomas Barnett is an advocate of Horizontal Thinking and dedicated a section of his first book, The Pentagon’s New Map, to that process which he entitled ” How I Learned to Think Horizontally”. Barnett credited this technique and outlook of mind with making him a global strategist and enabling him to develop PNM theory by seeing the interconnections.

Horizontal thinking is an extremely powerful tool. In fact, I will later argue in this series that it is the required catalyst for the generation of insight but Horizontal thinking alone won’t do it in terms of cognition. Instead, Horizintal Thinking works best in conjunction with
“traditional “Vertical Thinking the way your right hand works with your left. Or as creativity theorist Edward DeBono originally summarized the relationship:

The unhappiness to which Dr. DeBono refers is a result of the nature of modern, Western, education which is designed, at the apex of the system, to develop people with rarified skill-sets and a very high degree of expertise, usually in an aspect of a subfield of a much larger discipline in say science, medicine, engineering or law. Practitioners take the broadest view when they are initially introduced to the general principles of their field but as their knowledge base deepens, vision narrows as the professional perspective shrinks to the most complex problem or leading edge of field knowledge.

At this stage there are relatively few people at this level with the competency to act as a peer or offer competing ideas or correct errors. The field’s Rule-set which includes principles as well as habits of mind becomes for the high-level practitioner, a two edged sword. They define the expert but they also create a psychological frame that screens out much vital data from the expert’s awareness – this is the educated incapacity phenomenon decribed by Herman Kahn. The expert actually becomes more efficient at ruling out possibilities, in light of the field’s Rule-set, than in generating them. A frustrating cognitive trap that John Boyd called ” paralysis by analysis” where all potential moves are seen to have so many downsides that they become less attractive choices than remaining still.

Horizontal thinking can get the expert out of that mental cul-de-sac by setting aside analysis in favor of synthesis, intuitive pattern recognition, suspension of judgment, reversing/challenging premises, counterfactual thought experiments and brainstorming alternatives. These exercises are intended specifically to get he expert to look outside the confines of their field and into others in search of parallels and analogies. An important first step toward the realization that the field Rule-set is a tool and not – as is usually the case with experts – something to be regarded as an end in itself.

In Part II we examine how using Vertical Thinking helps the horizontal thinker.

This entry was posted on Tuesday, April 26th, 2005 at 8:11 am and is filed under Uncategorized. You can follow any responses to this entry through the RSS 2.0 feed. Both comments and pings are currently closed.