The Wrath of Kahn 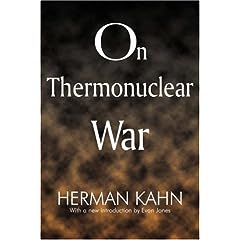 The post title is tongue in cheek. Herman Kahn was anything but wrathful and came across in his day as a remarkably cheerful strategist of the apocalypse and deep futurist. Long time readers have noted my admiration for Kahn’s metacognitive strategies but for those unfamiliar with Herman Kahn, he was one of those polymathic, individuals of the WWII generation who, like Freeman Dyson and Richard Feynman, could jump into high level nuclear physics research without bothering to first acquire a PhD in the field (Feynman later received a doctorate, Dyson and Kahn never did). Kahn was noted for his forthright willingness to consider humanity’s long term prospects despite the worst calamities imaginable – unlike most optimists, he assumed the events most terrible could happen – but life nevertheless would go on. A position that caused many of his critics to go ape, including the editors of Scientific American.

I bring this up because his daughter, Deborah Kahn Cunningham, emailed to say that Kahn’s classic On Thermonuclear War

the latter of which will have a new foreword by the eminent nuclear strategist Thomas Schelling.

This could not come at a better time. The Obama administration is making grandiose gestures with America’s nuclear deterrent based less on a hardheaded and comprehensive strategic analysis than self-serving political showmanship, tailored to mollify a Left-wing base deeply resentful of the COIN strategy the administration is starting to take in Afghanistan. Nuclear weapons affect the strategic calculus across the entire spectrum of potential decisions, they’re not just shiny, anachronistic, bargaining chips but the overwhelming reason that great power war came to an end in 1945. Period.

Human nature has not made much moral progress since the end of the Third Reich but its very worst instinct for total destruction has, so far, been held at bay by the certainty of self-destruction.

We need someone to remind us again of how to think about the unthinkable.

This entry was posted on Wednesday, May 13th, 2009 at 4:26 am and is filed under 21st century, America, arms control, authors, barack obama, book, defense, deterrence, foreign policy, ideas, intellectuals, national security, nuclear, strategist, strategy, theory, war. You can follow any responses to this entry through the RSS 2.0 feed. Both comments and pings are currently closed.

22 Responses to “The Wrath of Kahn”