With an arrest warrant from the Honduran Supreme Court (hat tip NYkrinDC), the Honduran military today removed from office President Manuel Zelaya, a political protege of Venezuelan President Hugo Chavez, for proceeding with an illegal referendum designed to lay the groundwork for an unconstitutional additional term in office. Zeleya has been sent into exile in Costa Rica. 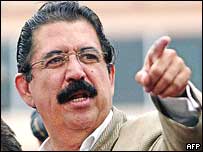 Zelaya’s referendum had been rejected by the Supreme Court, the Congress and even his own political party. Zelaya had ordered the military to support the referendum, when Army chief  Gen Romeo Vasquez refused, Zelaya attempted to fire him and subsequently took possession of the ballots by leading a large crowd of supporters to a military base where they had been impounded.

The Congress had already moved to investigate Zeleya’s fitness for continuing office prior to today’s coup. Venezuelans and Nicaraguans had been infiltrating Honduras in order to help Zelaya’s supporters with the referendum, and predictably, Chavez reacted with frustration at the setback dealt to Zelaya’s Bolivarian “soft coup” before it could even get off the ground to change the system itself.

Given Honduras unhappy history, military involvement in politics is naturally suspect, but in this instance, it was the civilian president who was determined to act against the constitutional order, operate outside it and break the rules in his own political interest. What happened in Honduras seems to me to be less a pro-active coup than a reactive counterrevolution by the military and broad elite. That Hondurans resented the hijacking of their country by the international left, orchestrated at home by a Chavez stooge is unsurprising, but the best strategic move now would be for the Honduran military to turn over power to Zelaya’s constitutionally designated successor, Congress President Roberto Micheletti, and let the civilian government take appropriate legal action, if any, against Zelaya and any foreign ALBA apparatchiks active in this crisis.

According to Zelaya’s initial comments, the USG has thus far,  mostly stayed out of this affair, refusing to sanction Zelaya’s removal, except to issue a mild reprimand against the Honduran military’s action.

The State Department attempts to square the circle with intellectually incoherent positions.

Chirol at Coming Anarchy weighs in:

….Former President Manuel Zelaya, ally of Venezuelan thug in chief Hugo Chavez, sought to illegally hold a referendum on changing the Honduran constitution. This could have allowed him to run again in violation of the country’s current term limits. It’s a classic trick of would-be-dictators and luckily did not succeed. While some in the media and elsewhere are labeling this a coup, I would not not. It’s rather a ‘coup’ in the same sense as Turkey has experienced several times whereby the military removed leadership that was violating the country’s laws.

Some may argue that the military’s removal of the president by force was not democratic. Indeed, on the surface it would seem to be illegal, however given that the president was pressing on with his illegal actions, declared so by the supreme court, congress and the military, it was in fact a fairly reasonable and foreseeable response. While of course, I do not encourage such actions by any military in general, in the case of Honduras, the constitutionally mandated checks on presidential power had failed. Since Zelaya blatantly continued his illegal activity, we can in fact be thankful that he was ousted before having a chance to rewrite the constitution and turn the country into an even poorer, worse off Venezuelan satellite.

This entry was posted on Sunday, June 28th, 2009 at 8:40 pm and is filed under democracy, elections, extremists, geopolitics, Latin America, legitimacy, military. You can follow any responses to this entry through the RSS 2.0 feed. Both comments and pings are currently closed.