zenpundit.com » Blog Archive » Even Mountain Dew has its Mellow Yellow

Even Mountain Dew has its Mellow Yellow

[summoned from the far regions of the deep bench by Lynn C. Rees]

Pilsudski was a revolutionary, dedicated to a policy of violent confrontation. Dmowski was a politician, dedicated to creating change from within the system. Pilsudski saw Russia as the true enemy of Polish independence. He was subjected to “Russification” as a student, leading him to observe later that, “With the Germans, we lose our land. With the Russians, we lose our soul”. In this spirit, Pilsudski soon involved himself in pro-independence agitation. This bought him the usual one-way ticket to a Siberian prison.

After his release, Pilsudski became a revolutionary. He became notorious for leading the only Polish party willing to use violence to win independence. To pursue his policy of violent resistance, from the safety of Austrian Poland, with a few nods and winks from Austro-Hungarian officials, Pilsudski created a Polish army complete with professional officer, NCO, and military training under the cover of setting up a network of Polish “sporting” and rifleman clubs.

Dmowski saw Germany as the true enemy of Polish independence. Russian backwardness was repellent to civilized Poles, he argued. They’d naturally resist Russification. Germany’s advanced culture was more dangerous: it could seduce wavering Poles into voluntarily Germanizing so they could hitch a ride on Germany’s meteoric ascent. Dmowski’s fear of Germanization led him to turn to Russia as a counterweight against German influence. Working with Russia, he believed,  offered the best path to eventual Polish autonomy. Pilsudski was a romantic. He harked back to the glory days of the Polish-Lithuanian Commonwealth. The Old Republic ruled over diverse ethnic minorities while tolerating may different religions. Pilsudski wanted to create a similar ethnically and culturally diverse citizenry, unified by a stronger republic within the Old Republic’s ancient borders.

While Polish culture in its heartlands would be protected from foreign suppression, it wouldn’t be imposed on Poland’s minorities. They could become “Polish” just by being loyal to the Polish state.

Dmowski was anything but romantic. A prominent biologist, he  was cold and rational. Dmowski looked back on four Polish uprisings against Russian rule in the nineteenth century and saw nothing but romantic foolishness. All they’d accomplished was bringing down Russian wrath on Poland. Like his slightly older contemporary Booker T. Washington, Dmowski argued that Poland should concentrate on peaceful modernization. Instead of romantic and doomed rebels, Poles should become scientists and businessmen.

Dmowski extended this refusal to romanticize to the Old Republic. Dmowski hated the Old Republic: he thought it was too tolerant and diverse. In the place of Pilsudski’s revived and wildly diverse Old Republic, Dmowski favored a homogenized Poland. Minorities ruled by the Old Republic would be excised from a more compact independent Poland. Dmowski saw the world through Social Darwinism. He saw nation fighting nation in a forever struggle for existence where strong trampled weak and only the fittest of nations survived.

Dmowksi’s Polishness was based on language and religion. Polish ancestry was helpful but not required: but, if Poland had to incorporate minorities, the few among a compact Poland’s many had to be strongly encouraged to speak the Polish language and practice the Roman Catholic religion.

These stark differences led to Pilsudski’s and Dmowski’s first  clash. When the Russo-Japanese War broke out, Pilsudski went to Tokyo to ask the Japanese government to support a Polish uprising. Dmowski traveled to Tokyo with a different purpose: to talk the Japanese out of supporting Pilsudski’s rebellion. Dmowski largely succeeded: the Japanese gave Pilsudski enough money and arms to distract the Russians but not enough to do anything that would make the Russian’s unreasonable.

When Pilsudski finally launched his uprising from Austrian Poland, Dmowski helped the Russians keep control of Russian Poland. He sent his party militia to fight Pilsudski’s party militia. The uprising failed. When the Russian Empire held elections for Russia’s parliament, Pilsudski’s party boycotted the elections. Dmowski’s party participated and won most of the open seats. Dmowski himself became a member of parliament and a political insider. Pilsudski retreated back to Austrian Poland and continued building up his forces for the general European war he presciently foresaw.

World War I began with Dmowski supporting Russia and Pilsudski leading Polish troops under Austrian command. Later, after he failed to get firm Russian commitments for more Polish self-rule, Dmowski went lobbying among Russia’s allies. He formed what the Allies recognized as Poland’s legitimate government (Thomas Woodrow Wilson (may his bones be crushed) was not impressed, “I saw Mr. Dmowski and Mr. Paderewski in Washington, and I asked them to define Poland for me, as they understood it, and they presented me with a map in which they claimed a large part of the earth.”). Pilsudski’s opposition later in the war to using Polish soldiers as what he described as “German colonial troops” led to his imprisonment by the Germans. 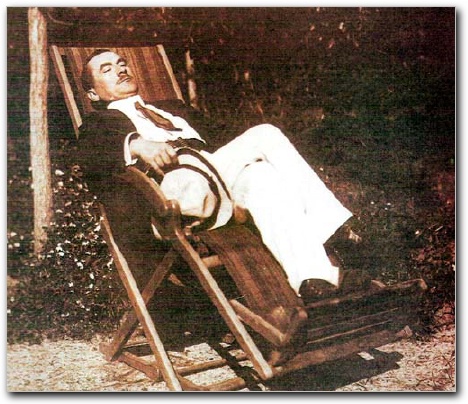 After Germany surrendered, Pilsudski had enough troops on the ground to win control of Poland. But Dmowski had the backing of the Allies and, soon enough, had his own army. In order to head off a civil war between their supporters, the two signed an agreement where Dmowski became the Polish representative to the Paris Peace Conference while Pilsudski became provisional president of Poland. At Versailles, Dmowksi followed his vision of the future Polish nation and concentrated on obtaining territory with Polish majorities while territory that lacked Polish majorities. Pilsudski, in pursuit of his vision of the future Polish state, focused on creating facts on the ground by military conquest of “unredeemed” parts of the Old Republic.

While Pilsudski succeeded in winning large territories with non-Polish majorities for Poland, Dmowski controlled the Polish government in the early 1920s. As promised, he actively “polonized” those minorities. Pilsudski pulled a 1/2 DeGaulle, coming from self-imposed exile at his rural estate to lead a coup in 1926 that reversed Dmowski’s policy. After seizing power, Pilsudski was free to implement his own vision of a trans-ethnic New Old Republic. Ironically, after Pilsudski’s death in 1935, Pilsudki’s own followers implemented Dmowski’s policy. Dmowski himself died early in 1939, right before Nazi Germany and Communist Russia partitioned Poland for a fourth time that fall. Ironically, Dmowski’s vision of Poland  triumphed over Pilsudski’s, though it  came about in a sinister and twisted way. Hitler liquidated Poland’s large Jewish community. Joseph Stalin took away the territories Pilsudski had conquered at the end of World War I. Polish minorities in those territories were expelled into Poland and the minorities of eastern Poland, primarily Ukrainians, were expelled into the Soviet Ukraine. In the west, 10 million Germans were expelled from the sections of eastern Germany transferred to Poland that Dmowski had earlier coveted. As a result, post-1950 Poland became homogeneous in culture, religion, language, and ethnicity. Very Dmowski. But modern Poland reveres Pilsudski, the romantic hero, over Dmowski, the logical realist.

Pilsudski was the proponent of the State and Dmowski was the proponent of the Nation. In David Ronfeldt’s TIMN (Tribe-Institution-Market-Network) framework, Pilsudski stood for the Institution and Dmowski stood for the Tribe. Pilsudski sought to bind people together through loyalty to a new Institution, the state. The Institution would largely replace  the Tribe in the hearts of the Polish people. If the Polish nation, as a Tribe, exercised any power over the other Tribes, it would be through the “soft power” of  Polish culture. Dmowski, in contrast, sought to bind people together through loyalty to an existing Tribe, the nation. Poland had an existing linguistic, territorial, and religious  heritage (Dmowski wasn’t big on traditional Polish culture). That was a surer foundation for a political community, enabling it to survive in the international jungle. Minorities should  be excluded  or strongly encouraged  to adopt the distinctive Tribal trappings. If not, they would be a source of weakness. Nations and states have existed since the dawn of history. Sometimes they overlap into a nation-state, sometimes they don’t. Many of the earliest political communities known to us were states. The first Mesopotamian empires were unified Institutionally. However, they also contained a multitude of Tribes. Egypt, on the other hand, had many features of a nation-state, having been unified politically and culturally at the literal dawn of history. While Egypt had its moments of disunity, it kept a strong sense of self well into Roman times.

In the early twentieth century, nation-states seemed to be the hip-happening thing: France and Britain had become powerful and acquired great empires after becoming nation-states in late medieval times. This inspired nation-state-building exercises all over Europe, with Germany and Italy being the most prominent. It inspired Dmowski. He preferred the Anglican and Lutheran faiths as examples of national religions, since they were based in the nation itself. He viewed Rome with suspicion since the Catholic Church was headed by a foreign potentate. However, he later came to accept that the bond between Catholicism and Polish identity was so strong that Catholicism was the de facto Polish national church.

The rise of nation-states elsewhere in Europe contrasted with the fate of Poland in the late eighteenth century. Dmowski’s analysis of the Old Republic was that it had become so diverse and diffuse that it easily spun itself apart. Foreigners were able to champion different factions and minorities within Poland, using the peculiar institutions of Polish republicanism to weaken what had once been the major power in Eastern Europe. The future had not belonged to this multinational federal republic but to its highly centralized, autocratic neighbors Russia, Austria, and Prussia. Dmowski sought to banish this wild frenzy of ethnic, cultural, and religious diversity in favor of a consolidated Polish nation focused on modernization.

Pilsudski’s vision of a multi-ethnic, multi-cultural, and multi-denominational federated republic is more appealing to modern tastes. Pilsudski’s vision of a polity based on loyalty to a state apparatus and a set of abstract values is widely shared in contemporary elite circles, particular those overlapping with the EU, UN, and other supra-national institutions. Diversity and tolerance are now held up as core principles to build a modern political community upon. Pilsudski treated Poland’s minorities with respect during his dictatorship, only insisting that they swear loyalty to the Polish state.

His ambitions even stretched beyond Poland: Pilsudski sought to create a federation (Intermarum) that would unite Central and Eastern Europe from the Baltic Sea across the European Peninsula to the Black Sea. This was yet another echo of the Old Republic, which at its height also stretched from the Baltic to Black. This plan made little headway when Pilsudski proposed it. The new pygmies of Eastern Europe only grudgingly clumped together into a less ambitious yet equally untenable two-front proto-Iron Curtain against revisionist/Marxist Russia and revisionist/revanchist Germany.

Pilsudski and Dmowski correlate with veteran American publicist Howard Bloom’s proposed “diversity generators” and “conformity enforcers”. Pilsudski’s federation and Institution represent diversity generation. Dmowski’s nation and Tribe represent conformity enforcement. One rapidly mutates to provide multiple ways to adapt. One imposes commonality so adaptions can be shared and applied. Both are needed in any healthy system. The right and proper balance struck between them is a constantly shifting dilemma.

This entry was posted on Saturday, February 22nd, 2014 at 11:19 pm and is filed under Geography, howard bloom. You can follow any responses to this entry through the RSS 2.0 feed. Both comments and pings are currently closed.

7 Responses to “Even Mountain Dew has its Mellow Yellow”