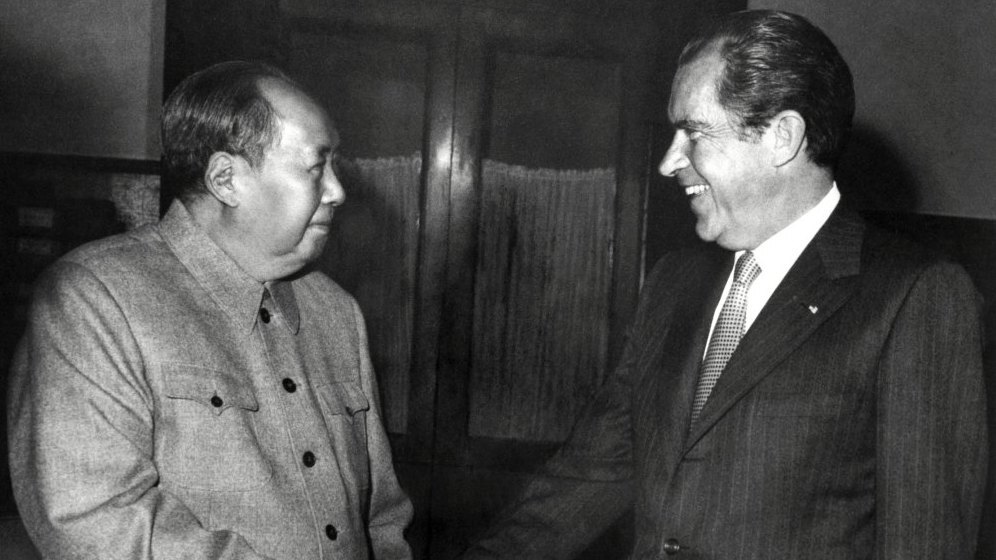 ….What is clear is that the current conflict has been exacerbated by profound misperceptions and misplaced expectations that go back decades, eliciting feelings of betrayal on the U.S. side and arrogance on China’s side.

All these dynamics were on the mind of Mr. Trump’s national security adviser, Lt. Gen. H.R. McMaster, as he rode the next day in the presidential motorcade toward the massive, Soviet-style facade of the Great Hall of the People, for another meeting with Chinese leaders. The three-star Army general was preparing to unveil a new U.S. national security strategy at home with an elevated focus on China. On his first trip to the country, he was soaking up “the symbolism, the zeitgeist” of Beijing, he recalls in an interview.

As General McMaster settled into a black swivel chair at a conference table in the great hall, he and his team had one simple goal: to wrap up the meeting quickly so the president could prepare for the evening’s lavish dinner. Premier Li Keqiang began speaking, reading from 5-by-8 cards – as Chinese officials often do to stay on message. The general girded himself for more empty diplomatic speak.

But what came next surprised General McMaster. Despite Mr. Li’s reputation for being friendly to the West and relatively pro-reform, he spoke bluntly, echoing Chairman Xi’s assertive 3 1/2 hour speech at the October party conclave. His brusque message: China no longer needs the U.S. China has come into its own. Beijing would, however, help Washington solve its trade problem by importing U.S. raw materials for China’s emerging high-end manufacturing economy.

What struck General McMaster was how Mr. Li’s monologue suggested an almost neocolonial relationship between a superior China and a servile U.S. It was “remarkable for the aura of confidence, you could almost say arrogance, and the degree to which he dismissed U.S. concerns about the nature of not only the economic relationship but the geostrategic relationship,” he recalls.

Such encounters helped convince General McMaster that a dramatic shift in China strategy was critical. “It reinforced the work we were doing and highlighted the urgency of it,” he says.

Soon, it would be Beijing’s turn to be surprised.

Imperious rhetoric was also a feature of Chinese Cold War diplomacy under Mao ZeDong and Zhou Enlai during the first twenty years after the 1949 declaration of the People’s Republic; first toward the United States and then increasingly toward the Soviet Union as the two Communist giants accelerated to the Sino-Soviet Split. Interestingly, during this time the PRC fought a ground war against US and UN forces in Korea and later clashed militarily with the USSR over some islands in the Ussuri river border area which nearly escalated to a nuclear war. Relations with Moscow had grown so hostile and the ideological convulsions of the Cultural Revolution so extreme that when Soviet premier Alexi Kosygin phoned Zhou Enlai in an attempt to defuse the order war, the Chinese operator screamed at Kosygin that she would not put through a call of “a revisionist”. Only after this near miss with WWIII, did Beijing’s rhetoric toward the United States soften at the Warsaw talks and warm in a series of diplomatic backchannels to the Nixon administration.

Mao has been something of a convenient lodestone for Xi in his drive to centralize power in his own hands, tighten the grip of the Party over the life of ordinary Chinese citizens and expand China’s influence in the world, echoing Mao’s prior ideological effort to contest for leadership of the Communist bloc, especially those “revolutionary” movements in the Third World struggling against “western imperialism”.

In December 2017, Washington released its new National Security Strategy. In sharp contrast to the 2015 blueprint, which welcomed China’s rise and hailed “unprecedented” cooperation, the new document labeled China a “strategic competitor” that seeks to “shape a world antithetical to U.S. values and interests” and “displace the United States in the Indo-Pacific.”

Underlying this shift – ending the decades-old U.S. policy of engagement with China – was American disappointment that had been building for years. To be sure, U.S. engagement with China had multiple goals and had succeeded on many fronts. President Nixon reestablished ties with Beijing primarily to counter the Soviet Union, and the normalization of U.S.-China relations in 1979 ushered in decades of relative peace and rising prosperity in East Asia.

….“Was it foolish or … misbegotten? I don’t believe it was,” says Orville Schell, director of the Center on U.S.-China Relations at the Asia Society in New York. Engagement was worth the chance, he says. At different junctures, Communist Party reformers seemed to gain the upper hand. But success was never guaranteed. Hard-line, anti-Western leaders won out, fearing a loss of control that would spell the party’s demise, he says.

What was naive, experts say, was the conviction among some Americans that opening China’s markets made political liberty inevitable – a misperception echoed in centuries of Western interactions with the country.

Western engineers, soldiers, and other advisers brought expertise to China “as the wrapping around an ideological package,” seeking to entice the Chinese to accept both, writes historian Jonathan Spence in “To Change China,” a study of Western advisers in the country from 1620 to 1960. “It was this that the Chinese had refused to tolerate; even at their weakest, they sensed that acceptance of a foreign ideology on foreign terms must be a form of weakness.”

“China saw that prosperity was related to capitalism, and Deng Xiaoping’s revolution basically adopted capitalism with socialist characteristics,” says Ambassador Julia Chang Bloch, president of the U.S.-China Education Trust. “Things they saw in America were things they aspired to – not the values, not the political system, but the things, the prosperity. They wanted that.”

….But as reforms stalled and then reversed after Mr. Xi took charge in 2012, disenchantment grew among Americans who had long championed change in China.

Some U.S. officials, in fact, felt deliberately misled. Looking back, General McMaster, who has a Ph.D. in history from the University of North Carolina at Chapel Hill, sees deception. “The party officials with whom we engaged for so many years, in so many different dialogues, were just great at stringing us along and holding the carrot in front of our donkey noses,” he says.

U.S. engagement “underestimated the will of the Chinese Communist Party (CCP) to constrain the scope of economic and political reform,” concludes a White House report on China strategy published in May.

Tyson does an excellent job reconstructing the rosy assumptions of US post-cold war policymakers regarding China “evolving” toward, if not liberal democracy, a mellower state increasingly incorporating western notions about liberal markets and rule of law domestically while becoming a responsible global citizen internationally. McMaster deserves plaudits for pushing a (very) long overdue strategic reassessment of China’s ambitions abroad and the nature of the regime at home. Ironically, McMaster’s difficult tenure at the NSC probably would have been far more successful in most regards in a “normal” Republican administration like that of Ford or either Bush but would never have succeeded in revising China policy with an establishment administration. While it is fashionable today to express bipartisan skepticism of China now, prior to Donald Trump taking office, the DC foreign policy consensus backed by corporate America was to ignore Beijing’s insults and provocations, no matter how outrageous, when not actively rewarding them. That’s an uncomfortable fact to discuss in a polarized campaign season, but a fact it remains.

Since McMaster left the administration, Xi’s regime has engaged in mass incarceration of the Uighurs, built the most advanced surveillance state in human history outside of Orwell, engaged in border disputes with most of its neighbors, including India, crushed Hong Kong, stretched it’s Party and secret police hands to university campuses in Western democracies and is currently threatening – loudly – to invade Taiwan. One would hope that regardless of the outcome of the presidential election that the new consensus to stand firm against Chinese belligerence will hold firm in Washington and that Xi’s regime will be measured by it’s actions as well as it’s chronically unfriendly words.

This entry was posted on Saturday, October 24th, 2020 at 1:42 am and is filed under 20th century, 21st century, America, china, foreign policy, geopolitics, Mao ZeDong, mcmaster, strategy, trump, xi. You can follow any responses to this entry through the RSS 2.0 feed. Both comments and pings are currently closed.