Archive for the ‘historiography’ Category

[ by Charles Cameron — because the Bene Gesserit understand the power of Mahdism and jihad ]
.

As T Greer, friend of this blog, notes in a comment to that last Tarchin post, his explorations would fit in nicely with the work at Grand Blog Tarkin

Discovering a New Circle of Hell There is an understandable buzz when a historical event as well known and deeply investigated as  the Holocaust has suddenly been found to have been underestimated by an order of magnitude.

From The New York Times:

The Holocaust Just Got More Shocking

….As early as 1933, at the start of Hitler’s reign, the Third Reich established about 110 camps specifically designed to imprison some 10,000 political opponents and others, the researchers found. As Germany invaded and began occupying European neighbors, the use of camps and ghettos was expanded to confine and sometimes kill not only Jews but also homosexuals, Gypsies, Poles, Russians and many other ethnic groups in Eastern Europe. The camps and ghettos varied enormously in their mission, organization and size, depending on the Nazis’ needs, the researchers have found.

The biggest site identified is the infamous Warsaw Ghetto, which held about 500,000 people at its height. But as few as a dozen prisoners worked at one of the smallest camps, the München-Schwabing site in Germany. Small groups of prisoners were sent there from the Dachau concentration camp under armed guard. They were reportedly whipped and ordered to do manual labor at the home of a fervent Nazi patron known as “Sister Pia,” cleaning her house, tending her garden and even building children’s toys for her.

In Berlin alone, researchers have documented some 3,000 camps and so-called Jew houses, while Hamburg held 1,300 sites.

….The lead editors on the project, Geoffrey Megargee and Martin Dean, estimate that 15 million to 20 million people died or were imprisoned in the sites that they have identified as part of a multivolume encyclopedia.

Perhaps some of you will recall the controversy in the late 1990’s surrounding the release of Hitler’s Willing Executioners by Daniel Goldhagen where Goldhagen argued that Nazi genocide was only possible with the widespread complicity and often enthusiastic participation of “ordinary Germans” who were not themselves Gestapo agents or Nazi fanatics.  One of the primary charges against Goldhagen by academic historians was his generalizing indictment of a generation of Germans for Nazi policy that was, for all intents and purposes, officially a state secret.  After all, the closest thing to a “public” discussion in the Third Reich of the Final Solution was a terrifying speech by SS-Reichsfuhrer Heinrich Himmler at the Posen Conference to an assembly of Gauleiters  and Reichsleiters who constituted the aristocracy of the Nazi Party.

The sheer geographic density and social ubiquity of the Nazi machinery of repression and genocide documented by researchers severely undermines the critics of Goldhagen. While it is well documented that most Germans, unless they were political opponent or social misfits, did not personally feel the heavy hand of the Gestapo in the way Soviet citizens experienced the NKVD, Germans during the war years irrefutably lived cheek by jowl with the miserably wretched slaves of the Reich.

Some of the shock produced by this investigation is due to an artificial “parsing of genocide” by historians into distinct categories of death-dealing instead of looking at Nazi democide as a whole cloth or continuum.

In the immediate aftermath of the war, there was little interest beyond the Nuremberg  Tribunal in delving into the depths of Nazi crimes. Reconstruction of Europe and “getting on with life” or the exigencies of the Cold War and the ominous threat of the Soviets took far greater precedence. Even among Holocaust survivors themselves, there was initially an effort to “move on” from the unimaginable, or to make a anguished pretense of so doing, as expressed in the critically acclaimed Rod Steiger film, The Pawnbroker. When historians began more serious examinations of Nazi crimes in the 1960’s and 1970’s, there was a tendency to separate the Holocaust from related or similar atrocities due in part to the overriding ideological emphasis the most extreme Nazis placed upon the total and absolute elimination of all Jews – every last one – at all costs,. Even over and above winning the war.

However, that genocidal crusade by the SS against the Jews also facilitated the deaths of millions of others – including the Gypsies (marked for nearly complete extermination), the “useless eaters“, some 700,000 Serbs to please the Ustase puppet regime, political opponents who disappeared into the Night and Fog, and a vast democide of Slavic peoples to feed the Third Reich’s inexhaustible need for slave labor. Albert Speer wrote that Himmler coldly planned a further massive reduction of the Russian and Ukranian populations west of the Urals to build a post-war Nazi racial empire in vanquished Russia.

The scale of murder by totalitarian governments in the 20th century approaches the mythic, a phenomena for which the Holocaust has become a totem.

Mali: the wider context, the right now and the longue durée

[ By Charles Cameron — cross-tagging some useful resources from natsec bloggers with another from a bright historian friend ]
.

Daveed Gartenstein-Ross‘s Globe and Mail piece The War’s in Mali, But the Danger is International from almost a week ago gave a global context to the conflict, while his more recent Al Qaeda in the Islamic Maghreb and Al Qaeda’s Senior Leadership on Gunpowder & Lead addresses the issue of relations between AQIM and AQ senior leadership.

Zeroing in, we have a 4-part series on the jihadist actors in Mali from Andrew Lebovich, posting on Jihadica:

— and there’s one more in the series which has now been posted:

And by way of cross-fertilization of immediacy with history, here’s the key Mali para from The Slightly-More-Longue Duree by my friend, Swarthmore historian Tim Burke, on Easily Distracted:

I would never for a moment want to fall back on a pure restatement of ibn Khaldun’s famous interpretation of the history of northern Africa (and the world) and say, “See, this is just pastoralist nomads versus settled agriculturalists and city-dwellers”. But there is a much more specific history that has considerable depth and antiquity to it that involves relationships between Berber-speaking Tuareg pastoralists, Fulani pastoralists, and the settled agricultural societies of the Niger River; between North African states and Sahelian states; between cities and their rural hinterlands; between Islamic cultures and non-Islamic ones. That all matters not just as contemporary sociology but as deep and structurally recurrent history, as a series of patterns and concepts that can be consciously recited by contemporary combatants but that also can be the structural priors of how they mobilize for and imagine conflicts.

To talk about deeper histories is not to explain current conflicts as destiny, or to put aside a whole host of material, economic, geopolitical and cultural issues with much more immediate explanatory weight. But somehow I feel as if we have to give people struggling to understand what’s happening (and what to do about it) the permission to consider all of the history, as well as the guidance to help them to weigh its importance in context.

To Lexington Green and James Bennett, for finishing their new book, America 3.0 – due out (I think) in 2013 published by Encounter Books.

A political vision for an era desperately short on imagination and needing statecraft of inspiration.

The Antilibrary of the Living Dead

From time to time we talk here about “the pile” of books waiting to be read, or the larger “Antilibrary” which briefly also became a blog, now defunct:

….The writer Umberto Eco belongs to that small class of scholars who are encyclopedic, insightful, and nondull. he is the owner of a large personal library ( containing thirty thousand books), and separates vistors into two categories: those who react with ‘Wow! Signore professore dottore Eco, what a library you have! How many of these books have you read?’ and others – a very small minority- who get the point that a private library is not an ego boosting appendage but a research tool. Read books are far less valuable than unread ones. The library should contain as much of what you do not know as your financial means, mortgage rates, and the currently tight real estate market allow you to put there. You wil accumulate more knowledge and more books as you grow older, and the growing number of unread books on the shelves will look at you menacingly. Indeed, the more you know, the larger the rows of unread books. Let us call the collection of unread books an antilibrary.

It occurred to me the other day, that the Antilibrary contains some unread books that, while bought we the best of intentions, perhaps even an air of anticipation, yet were never read – and at the current rate of new book purchases, never will be. To get “living dead” status a book needs to have been sitting on a shelf for a minimum of five years (the archives of book collectors don’t count since they are buying to own or invest and not always to read) and ten is even better. Here are a few of mine:

Tecumseh: A Life – by John Sugden

My only explanation is that this one was a gift by a well-meaning friend who knew in a vague sort of way that I am “into history”. I really don’t care very much about Tecumseh and still less about his brother the Prophet ( maybe if he had a better handle on the prophecy thing their confederation would have won). 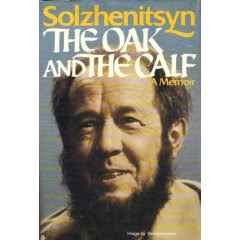 The Oak and the Calf by Aleksandr Solzhenitsyn

This has been sitting on my shelf for 20+ years. This is odd, because I’ve read The Gulag Archipelago twice, along with Cancer Ward,  The First Circle and August 1914.  Not sure if I burned out on Russian-Soviet studies at the time or if the collapse of Communism made it less relevant but it has never been cracked open.

As my Great-great Grandfather hailed from Germany, I now suspect the author may be a distant relation. That hasn’t helped me get started reading it. Does America Need a Foreign Policy by Henry Kissinger

One of the more ironically-timed books ever written, coming out a mere six months before 9/11, I have had this one for 10 years + and I think I bought it in hardcover for $4 (you can it used on Amazon for one cent. Ouch!). I have read a fair amount of Kissinger, including his acromegalic, multi-volume memoirs, but I can’t muster the energy to read this one.

What are you not reading and why?