Archive for the ‘steven pressfield’ Category

For one thing, I hadn’t realized Reynolds does short, Larry King-style vignettes. Considering that the MSM and the social media crowd have been going around the last few years saying “blogging is dead”, bloggers who can roll out professional quality television type productions without anyone batting an eye testifies to the durability of the medium.

Secondly, Steve probably sold more books with an Instapundit appearance than any other media venue, with the possible exception of a NYT book review.

My friend Steven Pressfield has a new novel out, one that touches on many themes and issues discussed here at ZP, SWJ Blog, Global Guerrillas, Feral Jundi and the rest of this corner of the blogosphere. Sometimes fiction can be a lot more fun 🙂

You can read the first chapter here.

Will have commentary and review at a later date.

I thought I’d back-track a little, and drag in two blog posts that I made elsewhere back in March of 2008, which may help to explain my basic outlook on the sorts of issues that analysts face.

I. The version of the idea as poetry:

My concern is the human mind in service
to an open heart, and my problem
is that the heart picks issues rich in ambiguity
and multiplicity of voices, tensions
and torsions tugging not one way but
in many directions, even dimensions, as does
a spider’s web weighed down with dew –
to clarify which a mind’s abacus is required
.
equal in subtlety to subtlety itself, while
in all our thinking and talking, one
effect follows one cause from question
to conclusion down one sentence or white
paper — whereas in counterpoint,
Bach’s fugal voices contain their dissonance.

II. The same idea presented in prose — as I say, a few years back — with graphical illustration:

Spiders and dewdrops do a pretty convincing job of portraying a certain level of complexity in this node-and-edge diagram of the global situation.

When, say, Castro hands over power to his brother, or Musharraf has to give up control of the Pakistani army, it’s like snipping a couple of threads in that spiders web — and the droplets fall this way and that, carom into one another, the fine threads they’re on swing down and around until a new equilibrium is reached…

But try thinking that through in terms of Cuba and Pakistan before breakfast one morning if you’re Secretary of State, with a linear Cold War mind, Russia going through its own changes, and al-Qaida and associates training and recruiting in the background…

Well, those two instances have been and gone, and the new configurations are now the tired old same old configurations we believe we’ve figured out — until another dewdrop slips, and a thread breaks, and all things are once again new…

Funnily enough, I think this spider’s web of mine ties in with the Hokusai quote I posted in response to Zen‘s quote from Steven Pressfield yesterday, and with a piece I read today about intelligence analysts — Martin Petersen, What I Learned in 40 Years of Doing Intelligence.

It’s the web of tensions that constitutes the “complexity” that must somehow be grasped by the analyst, the writer, the historian…

And Hokusai, watching across the years how grasses bend in the winds, reach for sunlight, bow under the weight of dew — and spring back when released — may finally have a mind that’s attuned to that kind of complexity — to a degree that linear thinking will never reach…

Book Review: Do The Work by Steven Pressfield 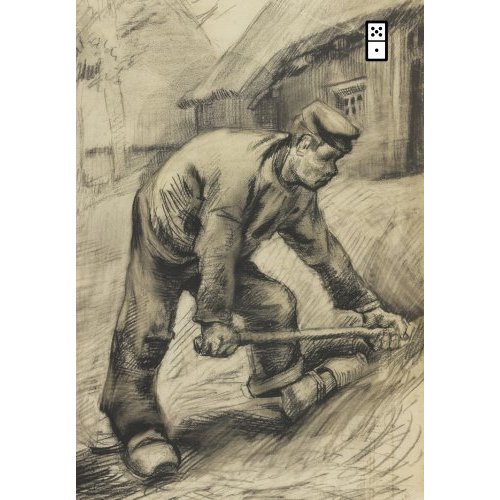 Do the Work by Steven Pressfield

Steven Pressfield has gone Zen on us with this little tome dedicated to the triumph of the creative spirit over the self-defeating power of “Resistance”. Do the Work is both a distillation and a complementary addition to his previous and longer non-fiction examination of becoming “a professional” in a creative field, The War of Art, which I recommend highly.

Here’s my favorite passage in Do the Work:

I was thirty years old before I had an actual thought. Everything up till then was either what the Buddhists call “monkey mind” chatter or reflexive regurgitation of whatever my parents or teachers said, or whatever I saw on the news or read in a book, or heard somebody rap about, hanging around the street corner.

In this book, when I say “Don’t Think”, what I mean is: don’t listen to the chatter. Pay no attention to the rambling, disjointed images and notions that drift across the movie screen of your mind.

Those are not your thoughts.

Something I try to impart in my students is the practice of metacognition. Not that I expect them to execute a precision analysis of their thought process the first time through, or even the fiftieth. Instead, I am trying to break them of habitually moving on mental autopilot, running “tapes” in their head recorded by cultural  osmosis, to stop and ask themselves, what do I really think here? With skepticism

and active, focused, attention. For more than a few, it is the first time in their lives experiencing what it is like to be intellectually awake and in control of their own thinking.

Reading Do the Work is a little like reading the Mao’s Little Red Book or Marcus Aurelius’ Meditations of writing. The sections are short vignettes of certitude that add up to a philosophical whole, in the case of Pressfield, a prescription for a personal creativity jihad based on in the moment creative action followed by reflection and refinement. It is meant for the person who can but doesn’t and doesn’t know why. Pressfield explains why and then, essentially, tells the reader to get off of the dime….NOW!

For the creative procrastinator ( like yours truly) or aspiring writer, Do the Work is a book that reads like an ass-kicking.

A busy day for blogfriends and associates….want to draw your attention to a few highlights:

First, congratulations to Matt Armstrong of MountainRunner on his new appointment as Executive Director of the US Advisory Commission on Public Diplomacy. It’s hard to think of anyone better qualified than Matt!

The U.S. Advisory Commission on Public Diplomacy is charged with appraising U.S. Government activities intended to

understand, inform, and influence foreign publics. The Commission formulates and recommends to the President, the Secretary of State, and Members of Congress policies and programs to carry out the public diplomacy functions vested in the State Department, Broadcasting Board of Governors, and other government agencies, as well as appraising the effectiveness of the public diplomacy policies and programs carried out by government agencies.

There are seven members on the Commission, with “not more than four members may be from one political party.” In February, the White House sent to the Senate four nominations for the Commission.

Today, Matt Armstrong, author and publisher of MountainRunner.us, was sworn in as the Executive Director of the Advisory Commission. The immediate impact is the suspension of blogging, including the publishing of guest posts, at MountainRunner.us.

Secondly, Steven Pressfield has a new book out, titled Do The Work, in Kindle format and, for a limited time, it is free! One of the great things about Steve is that as an author, he gives back to his readership in myriad ways and isn’t afraid to break new ground:

Never before done in the history of the publishing industry has this been done before (as far as we know, and we’ve checked) and we are so proud to be offering this phenomenal opportunity to our readership and the world.

General Electric has become our “Launch a Book” sponsor for  Do the Work, our latest release from The Domino Project.

What this means for you, the reader, is that you have access to the digital edition of this book for FREE. It won’t be free forever, so you should act now to grab your free copy. Order it here and it will be automatically delivered on pub date. You can read it on a Kindle, an iPad, an iPhone a PC and more. (If you already ordered your copy, your payment will be credited back to you…

Dr. Thomas P.M. Barnett threw some props my way for the Wikistrat futurist simulation on Turkey and managed to find a few sentences from my section that were non-abstruse and jargon-free 🙂 . The nice thing about the analytical process at Wikistrat is that people can grasp the part of the scenario where their strengths are emphasized ( I looked at possible external strategic options and impacts and left Turkish internals to those who could better drill-down):

Turkey – Re-Rise of the Ottoman Empire?

One of the most interesting things we do in Wikistrat is Scenario Planning. Through the use of live collaborative simulations, our analysts and subscribers alike engage in the mapping of scenarios, country interests and policy options on a given issue. We ran such drills on Egypt (The Egypt War Room) and on the “Sudden death of Kim Jong Il“.

Our current Simulation is on Turkey, and deals with its political and economic rise in the Middle East, its implications and potential pathways. So far several interesting scenarios were mapped, as well as interests and policy objectives for major regional and global powers affected by Turkey’s Rise.

Essentially we ask – Will Turkey’s rise continue? Will its relations with the West deteriorate given its “Shift eastward”? And- How should the US, the EU, Israel, Iran and the KSA react? [….]