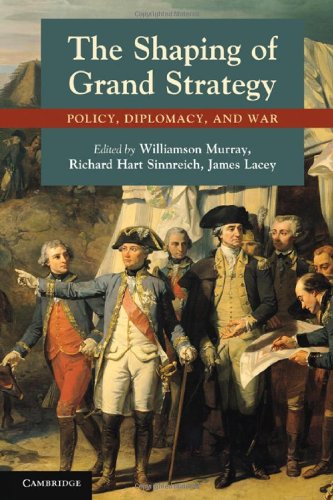 The Shaping of Grand Strategy: Policy, Diplomacy, and War

As readers of this blog know, grand strategy is an important and timely subject that speaks directly to the difficulty American leaders have had in navigating the ship of state in the waters of the international arena. The Shaping of Grand Strategy: Policy, Diplomacy, and War

by Williamson Murray, Richard Hart Sinnreich and James Lacey (Ed.) and contributing authors Colin S. Gray, Marcus Jones, Jeremy Black and John A. Lynn III postulates what grand strategy is and explain from historical case studies how statesmen struggled to fashion one in peace and war.

The Shaping of Grand Strategy has a number of strengths to recommend it to the serious student of history or strategic practitioner:

Focus: The case studies are all anchored in the Westphalian state system starting with the early modern period of European absolutism and apex of “national” monarchies and transitions through a Bismarckian 19th century to finish with the West’s cataclysmic 20th century battle with totalitarianism. This gives the chapters by different scholars a sense of cohesion and chronological succession.

Balance: The Shaping of Grand Strategy gives scholarly treatment from both the theoretical, strategic studies perspective as well as the historical case study. I learned some things about Louis XIV’s Europe and the Great Britain of the Pitts and the Hanoverian dynasty of which I was unaware. Theory bookends history in this tome.

Nuance: Each scholar gives his subject an adult treatment. Controversial points are interesting rather than shrill and each author engages an impressive synthesis of historiographic material as they cover a broad ground in investigating grand strategy. Each chapter is sound and engaging.

Limitations, such as they are, to be considered:

Weak: Insufficient treatment of the impact of nuclear weapons and deterrence on grand strategy, which frankly deserved a chapter of it’s own.

If you are composing a syllabus for a class on grand strategy or strategy, The Shaping of Grand Strategy would serve as an excellent generalist core for the course, supplemented by cognate, specialist or subtopical readings.

Some things that struck me while reading The Shaping of Grand Strategy:

High policy does not emerge in a vacuum, though it can be invented in a hurry without much forethought when necessity presses. Policy requires a North Star for guidance that can inspire, yielding to would-be leaders the fuel they require to recruit and satisfy their followers

The Shaping of Grand Strategy is a tight, concise and focused academic book that furthers the discussion of grand strategy by providing coherent and detailed examples as well as a readable an interesting analysis from which both the professional or the the student can profit.

6 Responses to “Book Review: The Shaping of Grand Strategy”