[ by Charles Cameron — cross-posted at BrownPundits — Zhuangzi, a light-hearted philosopher dancing to his own laughter, illuminated by CC Tsai ]
.

You may be acquainted with the yin-yang symbol — or as it’s more properly called, the Tai-chih or Taiji — but here’s CC Tsai‘s version, with dragon:

That’s the style of CC Tsai‘s illustrations, which — rather than Brian Bruya‘s translations — are the featured aspect of this version of the Zhuangzi: it also encapsulates the essence of Zhuangzi‘s thought.

Zhuangzi is a Taoist, one who would allow the arising and fading away of things in their natural order, with as little thought-commentyary, let alone intervention, as piossible — given the human tendency to go round and round in circles even while sitting still — Laozi‘s Tao Te Ching is the simple and direct exposition of this way of approaching and appreciating life, while Zhuangzi presents the same appreciation in the formm of quizzical tales and (naturally, absent) morals..

Ah. Thus the seagull, Laozi tells Confucius, who came to discuss benevolence and righteousness, doesn’t get white by soaping yup and washing itself, nor does the crow get black by dipping itself in ink: benevolence, similarly, is not a matter of soap and water — it simply arises where it arises.

You get the feeling Laozi wouldn’t mind having left it at the seagulls doing what they do, and likewise with the crows — but Confucius dropped by and asked about benevolence and righteousness, and Laozi responded as was only benevolent and polite..

My favorite story in all of Chuang Tzu / Zhuangzi is the story of Lord Wen-hui’s cook Ting, who taught him the natural way of things while cutting up an ox. In Burton Watson‘s translation:

Cook Ting was cutting up an ox for Lord Wen-hui. At every touch of his hand, every heave of his shoulder, every move of his feet, every thrust of his knee – zip! zoop! He slithered the knife along with a zing, and all was in perfect rhythm, as though he were performing the dance of the Mulberry Grove or keeping time to the Ching-shou music.

Cook Ting laid down his knife and replied, “What I care about is the Way, which goes beyond skill. When I first began cutting up oxen, all I could see was the ox itself. After three years I no longer saw the whole ox. And now – now I go at it by spirit and don’t look with my eyes. Perception and understanding have come to a stop and spirit moves where it wants. I go along with the natural makeup, strike in the big hollows, guide the knife through the big openings, and follow things as they are. So I never touch the smallest ligament or tendon, much less a main joint.

“A good cook changes his knife once a year-because he cuts. A mediocre cook changes his knife once a month-because he hacks. I’ve had this knife of mine for nineteen years and I’ve cut up thousands of oxen with it, and yet the blade is as good as though it had just come from the grindstone. There are spaces between the joints, and the blade of the knife has really no thickness. If you insert what has no thickness into such spaces, then there’s plenty of room – more than enough for the blade to play about it. That’s why after nineteen years the blade of my knife is still as good as when it first came from the grindstone.

“However, whenever I come to a complicated place, I size up the difficulties, tell myself to watch out and be careful, keep my eyes on what I’m doing, work very slowly, and move the knife with the greatest subtlety, until – flop! the whole thing comes apart like a clod of earth crumbling to the ground. I stand there holding the knife and look all around me, completely satisfied and reluctant to move on, and then I wipe off the knife and put it away.”

“Excellent!” said Lord Wen-hui. “I have heard the words of Cook Ting and learned how to care for life!”

That’s a long-ish quote, but its rollicking good humor will have carried you through it, and I wanted to give you a sense of the Zhuangzi as I have known and loved it — to taste it in comparison with CC Tsai‘s vision / version of the same tale, as represented in a couple of frames from his telling:

So now we have Burton Watson‘s “the blade of the knife has really no thickness. If you insert what has no thickness into such spaces, then there’s plenty of room” and Brian Bruya‘s “my knife glides in and out between the bone joints, moving as it pleases: the cow suffers no pain and, in the end, doesn’t even know it’s dead.”

Pretty remarkable, either way — but that’s in English, and who knows what contortions a translator must make to move from Chinese into English? Watson‘s Chuang-tsu is closer to Lao-tsu, if you compare the statement of principle to its embodiment in an anecdote: 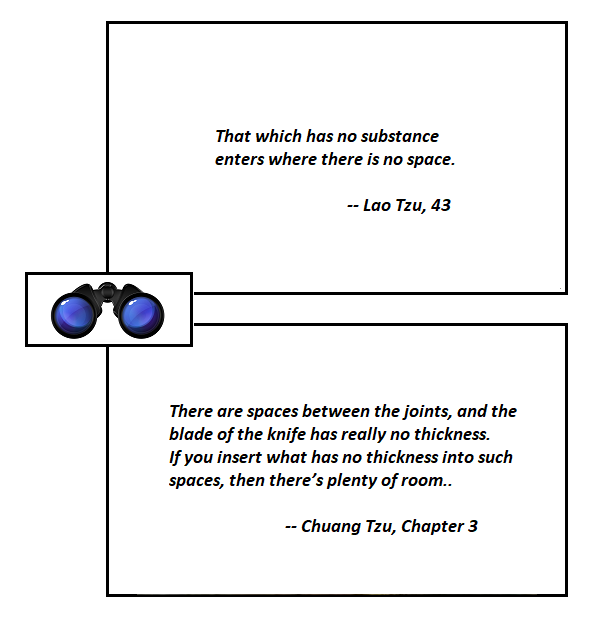 Ursula Le Guin‘s translation of the Tao Te Ching is even more succinct:

The immaterial enters the impenetrable..

No wonder cook Ting’s vorpal blade went snicker-snack, to borrow a phrase from Lewis Carroll‘s poem, Jabberwocky. And come to think of it, Lewis Carroll, aka Charles Lutwidge Dodgson, the Christ Church, Oxford logician, may indeed be the English language’s native equivalent of the Chinese Zhuangzi.

As I hope I have indicated, Chuang Tzu / Zhuangzi, even in translation, is a writer of enormous charm and insight, and CC Tsai‘s presentation marries the conventions of the comic book with classical Chinese artistry to provide an exemplary introduction to one of the world’s great philosopher-humorists.

This entry was posted on Sunday, July 28th, 2019 at 4:21 pm and is filed under art, book, Charles Cameron, china, chuang tsu, comics, humor, philosophy, review, tao, Uncategorized. You can follow any responses to this entry through the RSS 2.0 feed. Both comments and pings are currently closed.