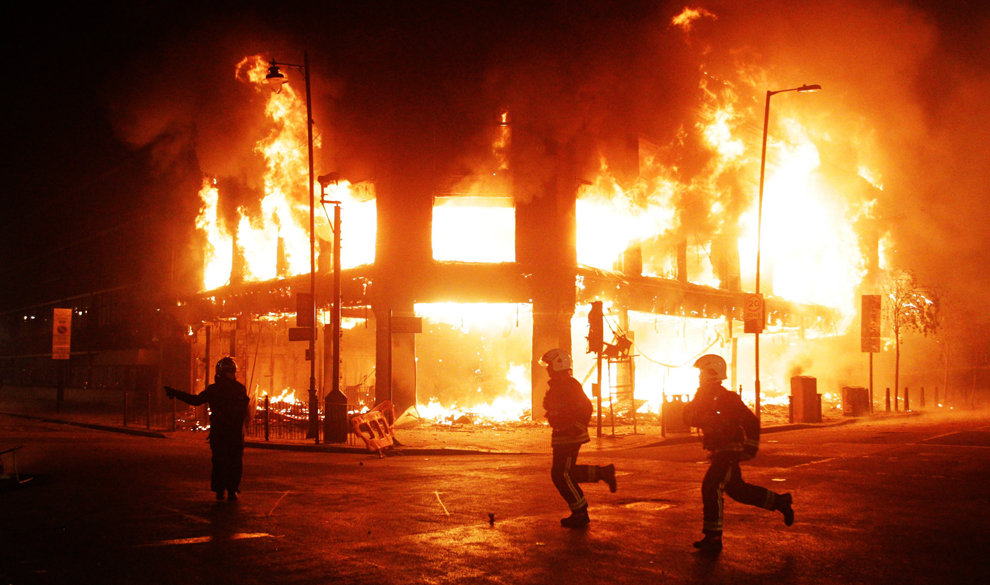 London burns for four days as UK authorities dealt timidly and uncertainly with semi-organized swarms of brazen thugs, causing rioting to spread to other cities. What have we seen so far?

* The British government and police acted with moral uncertainty in the face of violent challenge from swarming tactics by “underclass youth” rioters.  The BBC was filled with interviews of victimized citizens complaining about how police were unwilling to intervene to stop acts of looting, assault and arson. Police behavior fed the cycle of rioting and encouraged fence-sitters to join in and swell the ranks of the mob, as did early talking head comments in the British media that argued that the rioters were “justified”

* The British government was politically paralyzed by the crisis and needed three days and a Cabinet meeting to begin to organize an effective anti-riot strategy, distribute proper equipment, summon additional manpower, change police ROE and marshal a rhetorical narrative against the rioters.  All the halmarks of excessive top-down control by out of touch technocrats and politicians.

John Robb summed up this kind of anti-leadership beautifully in his review of Rebecca Solnit’s A Paradise Built in Hell  :

…In contrast to the people on the ground, she shows that the only people that actually do panic during disasters are the elites — from those with wealth to those running the government’s response (I’m not talking about the first responders actually on the ground doing good work).  They panic over the loss of control a disaster brings.  This often results in extreme actions that only serve to make things worse: from martial law authorized to use deadly force against looters (often just people trying to survive the situation) to arbitrarily hearding people into locations that aren’t able to support large groups of people.

The lesson here is that during an extreme disaster, the people you may most need to fear are those in charge, particularly if their motives are focused on protecting elite interests put at risk by the disaster

* The Cameron government’s legitimacy is at risk, being currently blamed for everything connected to the riot from the underlying “root causes”, to their initial total lack of interest in defending ordinary Britons to the bad impression made of having senior ministers being on vacation while the capitol of the UK was ablaze. Earnest and repeated assertions by government officials that no political or racial motives were behind the rioting conflicted with the reality being broadcast live by the government’s own news service in the first hours and days of the riot.

Handling a riot properly is state power 101. The Prime Minister has about two days to turn this situation and the political perceptions created around or he will begin an irreversible downward spiral to an early retirement.

20 Responses to “Descent into Barbarism”