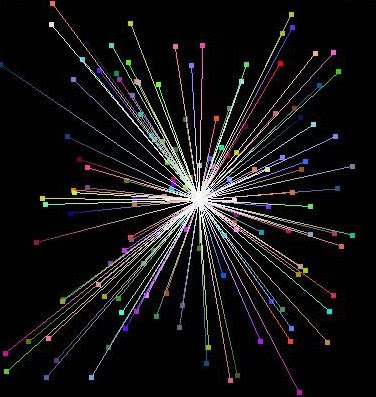 Connecting the Dots: Light on Light

In a recent blog-post on MahdiWatch, Timothy Furnish draws our attention to an Islamic think tank named Grande Strategy.

Their page of further readings on a future Islamic state includes works by an eclectic bunch – including Sir Muhammad Iqbal, recognized after his death and the foundation of the State as the national poet of Pakistan; Sheikh Taqiuddin An-Nabhani, the founder of the Hizb-ut-tahrir movement; Ali Shariati, the Marx-influenced Shi’ite radical intellectual viewed by some as the ideological force behind the Iranian revolution; Abul A’ala Maududi, Sunni writer and founder of Jamaat-e-Islam; Harun Yahya, also known as Adnan Oktar, a major Islamic creationist writer who holds that “Alawites, Wahabbites, Jafarites, they are all pure Muslims; harboring enmity against them is by no means acceptable”; Sayyid Qutb, Sunni author and Muslim Brotherhood member; and Ayatollah Ruhollah Khomeini, father of the Iranian Revolution.

Let’s just say that if the books of all these worthies were placed on a single bookshelf and given voices, the ensuing hubbub would resemble the House of Commons at Question Time.

One article on the Grande Strategy site – the one that caught Timothy Furnish’s attention – is titled To the Unknown Mujahid, May We Never Forget You. It is interesting, as Furnish notes, because it is yet another sign of Mahdist thinking in the region of Afghanistan / Pakistan. It describes a man seen teaching in a mosque in the Faisal Masjid (presumably in Islamabad):

I have never seen a human spirit glow in this manner. I did not think this was even possible. I checked myself by discretely asking a few other brothers (perhaps it was some deficiency in me), and they too confirmed. Let me intimately describe you this man, he was tall, bearded wore a military camo jacket and in all his manners was as if he had walked out of the 1st century Hijri. He spoke English well enough that you could tell he was well-educated and belonged to a noble family. He was from Kashmir, in fact an elected member of the local government (back then Musharaf was all about devolution of power to press the national parties). Some close relatives of his were also senior officers in the Pakistan Army. He was obviously a mujahid, although in my opinion one that was fighting against India and in Kashmir and had nothing to do with the Afghanistan war.

The writer recounts his experience of this man because, as he puts it…

There’s also an article on the site about the Black Banners from Khurasan — another marker for Mahdist expectation — that includes quite a mix of sources and resources: commentary, for instance, on the Scofield Reference Bible (a major source of “dispensationalist” end times beliefs) and the “Project for New American Century”, together with some conspiracism about 9/11 specifically and US policy in general:

The US’s War on Terror is a deceptive game and a mind boggling riddle. The term terrorism is itself vague and un-defined and built on repetitive lies upon lies as evident in the case of 9/11. It is almost always blindly used against Muslims. The unilateral, pre-emptive extra-judicial violence by the western powers is always named as wars of democracy and freedom.

— plus for good measure some information about the Jewish origins of the Pashtun / Pathan peoples, and this intriguing statement:

According to Syed Saleem Shehzad of Asia Times Online, Al Qaeda shares this belief with the Taliban that Afghanistan is the promised land of Bilad-e-Khurasan.

— which would mark both as apocalyptic movements (see here and here).

On the other hand, one comment from a Shi’ite reader suggests that President Ahmadinejad will be the one who recognizes the Mahdi and brings the victorious army to meet him:

When Shuayb Ibn Saleh (Pres. Ahmedinejad) learns of Al Mehdi (as) emergence he will head towards Syria under three banners each of which has 4,000-5,000 men. It is these banners that are of gaudiance that Allah’s Messenger (saas) spoke of when he mentioned that ‘ when you see this army coming from Khursan, then go and join that army even if you have to crawl over snow, because in that army is the Caliph Al Mehdi[as]’. This holds true because it is Shuayb Ibn Saleh who will consolidate the government of Al Mehdi (as) in Jerusalem within 6yrs (72months).

The Black Flags Coming from Khurasan is not of the Taliban … These Black Flags Belongs To Only Shuayb Ibn Saleh (Pres. Ahmedinejad)

But let’s get back to that business about the “Unknown Mujahid”. According to the report Furnish quotes from:

This particular class was being taught by a man, the like of whom I had never seen before, nor since have ever seen again. When you reach a certain level of spiritual enlightenment… sometimes you can “see” or “feel”… the “noor” or “aura” or “spiritual light” of another… This man did not have a glow – it was like a 1000 watt halogen lamp…

I have to say I find that report particularly interesting because, as Dr. Furnish notes, it offers a Sunni parallel to the self-description given by Iran’s Shi’ite President Ahmadinejad — who claimed on video that he’d been told by someone who was there, “When you began with the words ‘in the name of God,’ I saw that you became surrounded by a light until the end [of the speech]”, and commented, “I felt it myself, too. I felt that all of a sudden the atmosphere changed there, and for 27-28 minutes all the leaders did not blink.”

The thing is, this sort of report can also be found on both sides of the Iranian / Israeli aisle.

I had the privilege to experience the appearance of the G–d of Israel and His angels in one of the critical battles of Israel when I served in the Israeli Army as a young officer and my small unit was attacked by thousands of Syrian Arab soldiers. … It was night but I could see a light covering me from all sides and lighting the dark night. At the same moment, I could see the Syrian soldiers not shooting me but turning and running very fast back to the mountains. I again lost consciousness. I was told later that the Israeli soldiers looking for me in the darkness were only successful in locating me when they saw the light.

For what it’s worth, such stories can also be found about the divine or saintly figures of many religions.

The Bhagavad Gita describes a moment when Krishna shows his divine form to Arjuna, who describes it thus: “If a thousand suns were to light up the sky all at once, that radiance would equal the radiance of my Lord.”

In the New Testament, Matthew describes how “Jesus taketh Peter, James, and John his brother, and bringeth them up into an high mountain apart, And was transfigured before them: and his face did shine as the sun, and his raiment was white as the light.” (Matt. 17:1-2).

If I have points to make, there are several of them:

Oh – and that depth psychology (Freud, Brown, Jung, Hillman) and cultural anthropology (Bateson, Turner, Lansing) also have much to teach us.

Connecting dots is not so hard once you can see them — but how do you connect your blind spots?