Archive for the ‘morsi’ Category 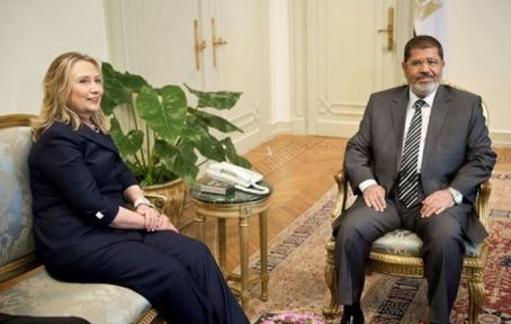 The Obama administration, though they would not characterize it as such nor have much desire to acknowledge it at all, have attempted  a strategic detente with the “moderate” elements of political Islam.

This policy has not been entirely consistent; Syria, for example, is a quagmire the administration has wisely refrained from wading directly into despite the best efforts of R2P advocates to drag us there.  But more importantly, under President Obama the US supported the broad-based Arab Spring popular revolt against US ally, dictator Hosni Mubarak, and pushed the subsequent ascendancy of the Muslim Brotherhood in Egypt and the Libyan revolution against the entirely mad Colonel Gaddafi. These appear to be geopolitical “moves” upon which the Obama administration hopes to build.

I would like to emphasize that there is one legitimate and valid strategic pro to this sub rosa policy; namely, if everything went well, it would provide the United States with powerful triangulation against revolutionary, apocalyptic, radical Islamism as expressed by al Qaida and various Salafi extremist movements. There are reasons, rooted in takfirism, strategy and the politics of lunacy that our terrorist enemies frequently hate and revile the Brotherhood as traitors, apostates or whatever. Isolating the most actively dangerous and violent revolutionary enemies from a large mass of potential allies is, at least, a good strategic goal.

It is also my view, that this “outreach” is as politically sensitive  to the Obama administration as was the China Opening was to Nixon and about which they have been equally opaque and misleading for fear of a domestic backlash. The weird, foot-dragging, dissembling, embittered, kabuki drama inside the Beltway about public statements and intelligence on whether Benghazi was caused by obscure crackpot Islamophobic film makers or a well-orchestrated terrorist attack  is in my view due to a major foreign policy strategy never having been framed in public for what it is. I’m sure people will differ strongly with me on this (which is fine), but I would characterize detente with Islamists as a strategic shift on par with the “Pivot to Asia”.

The downside here is that first, things are not likely to come out well at all, as unfinished revolutions tend to give birth to monsters; and secondly, any detente with “moderate” political Islam is an uncertain gamble based on certain exceptionally optimistic conceptions of not only what the Brotherhood might do, but about it’s very nature.

While the removal of Arab dictators resonated with American values , it was questionable realpolitik while the administration’s de facto support of  Egypt’s Muslim Brotherhood faction over poorly organized secular liberal modernists was an act of realpolitik that required a compromise of the democratic values so recently invoked to justify abandoning Mubarak. This was cynical diplomatic flexibility worthy of Talleyrand.

Unfortunately, the most democratic thing – perhaps the only thing – about Mr. Morsi and his Brotherhood supporters was his election.

The first question to ask in assessing if the Obama administration policy here is wise would be “What is the nature of the Muslim Brotherhood?” Americans love to personalize foreign policy, but if  Morsi were to be toppled or die, the Brotherhood will remain what it currently is, the best organized political force in Egypt and one widely influential throughout the Arab world and the West itself.

I am not an expert on the Muslim Brotherhood, nor am I an Arabist by education. Most of us aren’t – a group that I fear includes most of the Obama administration officials involved in shaping this policy. Almost fifty years after King Faisal determined to export Wahhabism, more than thirty years since Khomeini’s Revolution and more than ten years since 9/11 the USG still has less in-house expertise related to Islam than it did about the Soviet Union and Communism a decade after the Berlin Blockade.

Perhaps we all should begin learning more?

Here is an analysis from FPRI; it is extremely critical but it touches on organizational aspects of the Muslim Brotherhood that I have not seen elsewhere (hat tip to David Ronfeldt). Feel free to suggest others, both for and against. The Brotherhood is a very large group with a long history that includes violence , terrorism and subversion on one hand and peacefully representing expressions of pious, middle-class, social conservatism in other places and times:

Lecture Transcript: What Every American Should Know about Egypt’s Muslim Brotherhood, Delivered by Eric Trager

….Two years ago when I was doing my dissertation fieldwork in Cairo, I sought out interviews with leaders from the Muslim Brotherhood, and I was referred to a man named Muhammad Morsi, now the President of Egypt. At the time, President Mubarak was ill and had gone off to Europe for operations amid a lot of mystery surrounding his health. I asked Muhammad Morsi whether the Muslim Brotherhood would run a presidential candidate if Mubarak died tomorrow. Here is what he said:

[From an audio file played by Trager]

Muhammad Morsi: No… because society is not ready… Our society is not ready yet to really defend its worth. We want a society to carry on its responsibilities, and we are part of this society. Another thing, if we are rushing things, then I don’t think that leads to a real stable position.

When he made that statement, I don’t think he was lying, and I don’t think he was being coy. I think that he didn’t expect that he would be faced with this reality in a mere six months. He did not expect that Mubarak would step down six months later and, to be completely honest with you, neither did I. My dissertation was entitled “Egypt: Durable Authoritarianism”—until the revolution.

What did Morsi mean when he said that the Brotherhood was trying to build a society? Let me give you some background on the Muslim Brotherhood. It was founded in 1928 by Hassan al-Banna, who was a schoolteacher in Ismailia. The Muslim Brotherhood’s goal was then—and remains now—to establish an Islamic state in Egypt. The way it pursues this goal is by trying to Islamize Egyptian society. Through social services, education, and the mosque, it sought to make Egyptians more religious and more Islamic as a grassroots strategy for building an Islamic state. That’s very, very different from a strategy that says, “We’re going to run for president, run for the Parliament, and use that power to transform society.” Rather, the Brotherhood says, in effect, “We’re going to Islamize society to build towards power.” It was a long-term strategy; it took them 84 years before they ran for and won the presidency. So Morsi told me in 2010 that the Muslim Brotherhood was not going to run for the presidency because it was not done Islamizing Egyptian society….

[ by Charles Cameron — sincerity and symmetry as the basis for dialog and negotiation ]
.

If you read me regularly, you know I’m passionate about form as well as content.

Here’s the New York Times report on the interactions between Presidents Obama and Morsi in the runup to the Gaza ceasefire negotiations:

Mr. Obama told aides he was impressed with the Egyptian leader’s pragmatic confidence. He sensed an engineer’s precision with surprisingly little ideology. Most important, Mr. Obama told aides that he considered Mr. Morsi a straight shooter who delivered on what he promised and did not promise what he could not deliver.

“The thing that appealed to the president was how practical the conversations were — here’s the state of play, here are the issues we’re concerned about,” said a senior administration official who spoke on the condition of anonymity to discuss private conversations. “This was somebody focused on solving problems.”

The Egyptian side was also positive about the collaboration. Essam el-Haddad, the foreign policy adviser to the Egyptian president, described a singular partnership developing between Mr. Morsi, who is the most important international ally for Hamas, and Mr. Obama, who plays essentially the same role for Israel.

“Yes, they were carrying the point of view of the Israeli side but they were understanding also the other side, the Palestinian side,” Mr. Haddad said in Cairo as the cease-fire was being finalized on Wednesday. “We felt there was a high level of sincerity in trying to find a solution. The sincerity and understanding was very helpful.”

And here, by way of context, is David Bohm on dialogue:

One way of helping to free these serious blocks in communication would be to carry out discussions in a spirit of free dialogue. Key features of such a dialogue is for each person to be able to hold several points of view, in a sort of active suspension, while treating the ideas of others with something of the care and attention that are given to his or her own. Each participant is not called on to accept or reject particular points of view; rather he or she should attempt to come to understanding of what they mean.

What interests me here in the Obama-Morsi interaction as described is the dual emphasis on sincerity and symmetry. Sincerity is needed so that each of the two sides — Israel’s POV, as presented by Obama, and that of Hamas, as presented by Morsi — is in fact presented, and not hinted at, watered down or reneged on. And when both sides are in fact sincerely represented, they are mutually present — heard — and there is symmetry.

That symmetry, it seems to me — symmetry of form in the presentations of contents — is the facilitator of successful negotiations.