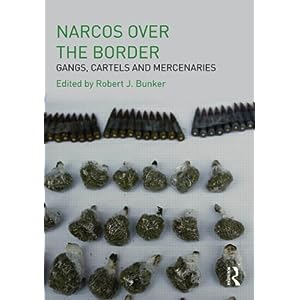 by Dr. Robert J. Bunker (Ed.)I just finished my review copy of Narcos Over the Border. It is one of the more disturbing academic works recently published in the national security field, not excluding even those monographs dealing with Islamist terrorism and Pakistan. If the authors of this granular examination of Mexico’s immense problems with warring narco-cartels, mercenary assassins, systemic corruption, 3rd generation gangs and emerging “Narcocultas”of Santa Muerte are correct – and I suspect they are – Mexico’s creeping path toward state failure reprsents a threat to American national security of the first order.

The 237 page, heavily footnoted, book is organized into three sections: Organization and Technology Use by the narcos networks, Silver or Lead on their carrot and stick infiltration/intimidation of civil society and the state apparatus, and Response Strategies for the opponents of the cartels. Bunker’s co-authors Matt Begert, Pamela Bunker, Lisa Campbell, Paul Kan, Alberto Melis, Luz Nagle, John Sullivan, Graham Turbiville, Jr., Phil Wiliams and Sarah Womer bring an array of critical perspectives to the table from academia, law enforcement, intelligence, defense and security fields as researchers and practitioners. The effort to blend disciplinary approaches in Narcos Over the Border is both an intentional and commendable effort to break down academic and policy silos and bureaucratic “turf” perspectives that prevent analyzing Mexico’s security dilemmas as an interrelated threat increasingly resembling a full-fledged insurgency (albeit not on the classic Maoist Model).Some impressions I gained from reading Narcos Over the Border include:

The authors do not assume the worst case scenario, state collapse, for Mexico but rather an insidious “hollowing out” of the state by the cartels and a mutation of Mexico’s native culture to host a 4GW nightmare. As Robert Bunker writes:

What is proposed here is that Mexico is not on it’s way to becoming a “rotting corpse” but potentially something far worse – akin to a body infected by a malicious virus. Already, wide swaths of Mexico have been lost to the corrupting forces and violence generated by local gangs, cartels and mercenaries. Such narco-corruption faced few bariers given the fertile ground already existing in Mexico derived from endemic governmental corruption at all levels of society and in some ways, it even further aided the ‘virus’ spreading through Mexican society from this new infection. Among it’s other symptoms, it spreads values at variance with traditional society, including those:

….conceivably derived from norms based on slaveholding, illicit drug use, sexual activity with minors and their exploitation in prostitution, torture and beheadings, the farming of humans for body parts, the killing of innocents for political gain and personal gratification and the desecration of the dead.

While meticulous, Narcos Over the Border is not all-encompassing in scope.  A fundamentally Mexico-centric collection of scholarly articles, it does not deal extensively with American policy makers involved in Mexico’s narco-insurgency, the intricacies of cartel financial operations or undertake case studies of narco activities in Mexican-American communities, though the authors do track narco-cartel and gang presence in cyberspace. Narcos Over the Borders represents a starting point for deeper investigation of narco-insurgency and for a national security comunity that has thus far treated Mexico as a third tier problem, a policy call to arms.Strongly recommended.

9 Responses to “Book Review: Narcos Over the Border by Robert J. Bunker (Ed.)”