Archive for the ‘ken robinson’ Category

Out of our Minds: Learning to be Creative by Sir Ken Robinson

I am about half finished with the first book by creativity in education guru Sir Ken Robinson, who also has a new book out called, The Element. Technically, I have been reading a large volume of books, articles and research regarding creativity and creative thinking lately for a project, but most of those are academic in nature while Robinson is writing for mainstream audiences. I may or may not review it here, but it is clearly argued and Robinson is an effective popularizer.

The biography of Wild Bill Donovan is timely. If the idiosyncratic and at times improvisational OSS, staffed by gifted amateurs, eccentric adventurers and white-shoe, unapologetically elite WASPS, was something that would be impossible to exist in today’s rancid political climate, there are elements in that legacy that are in short supply in today’s modern and highly technological IC.

Ironically, many of the pioneers in creativity research that developed that field within cognitve psychology in America were themselves disproportionately veterans of the OSS. 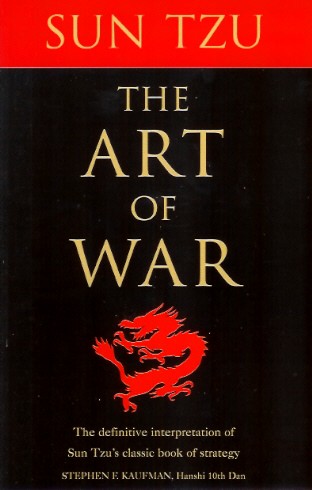 The Art of War by Sun Tzu

A BBC podcast on Sun Tzu’s classic The Art of War. Perhaps the most sublime work on strategy of all time ( Hat tip to The Warlord)

Via blogfriend Robert Paterson, a new talk by educational and creativity thought leader, Sir Ken Robinson. The ritual TED bowing to Al Gore notwithstanding, if you are interested in education issues, this is a must see video.

WHY SCHOOLS KILL CREATIVITY – BUT THEY DON’T HAVE TO

I watched this highly enjoyable TED presentation by Sir Ken Robinson at Dr. Florida’s Creative Class blog. Robinson has a solid critique that he delivers with gentle humor

Reproducing my comments at Creative Class, Creativity, in my humble opinion comes in several variants – generative insight, synthesis, tweaking/tinkering and the collective, stochastic/stigmergic, version of tweaking you see in open-source and/or market based “accumulated wisdom” forms of cultural evolution. They are not all the same thing nor do they, in my very limited experience of reviewing studies, look the same in MRI brain studies of cognitive tasks

Public education is not currently designed to promote any of these forms of creativity, though some instructors do. Instead the cognitive emphasis is on recall and at best, application and analysis. Certainly useful thinking skills but not the only ones students should have in their kit.

The good news is that these forms of creativity are not that hard to teach students to practice but the incentives to do so aren’t there for teachers or professors. With the former group, NCLB pressure mitigates against doing so; with the latter, the publish or perish ethic makes teaching itself an irrelevance at worst and a minor positive at best.